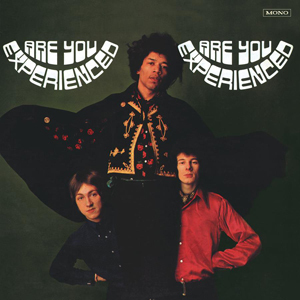 The Animals musician & entrepreneur Chas Chandler had brought Hendrix to the UK, teaming him up with drummer Mitch Mitchell and bassist Noel Redding. Recordings for Are You Experienced had begun in late October 1966, producing a string of singles preceding the illustrious first album by the world's most famous guitarist. While recording, the future working relationship between engineer Eddie Kramer and Hendrix was forged. The debut album by The Jimi Hendrix Experience was initially issued in mono and then 'enhanced stereo' on later issues.

you must have this in your music collection.

One of the most stunning debuts in rock history, and one of the definitive albums of the psychedelic era. On Are You Experienced?, Jimi Hendrix synthesized various elements of the cutting edge of 1967 rock into music that sounded both futuristic and rooted in the best traditions of rock, blues, pop, and soul. It was his mind-boggling guitar work, of course, that got most of the ink, building upon the experiments of British innovators like Jeff Beck and Pete Townshend to chart new sonic territories in feedback, distortion, and sheer volume.

It wouldn't have meant much, however, without his excellent material, whether psychedelic frenzy ("Foxey Lady," "Manic Depression," "Purple Haze"), instrumental freak-out jams ("Third Stone from the Sun"), blues ("Red House," "Hey Joe"), or tender, poetic compositions ("The Wind Cries Mary") that demonstrated the breadth of his songwriting talents. Not to be underestimated were the contributions of drummer Mitch Mitchell and bassist Noel Redding, who gave the music a rhythmic pulse that fused parts of rock and improvised jazz. Many of these songs are among Hendrix's very finest; it may be true that he would continue to develop at a rapid pace throughout the rest of his brief career, but he would never surpass his first LP in terms of consistently high quality.