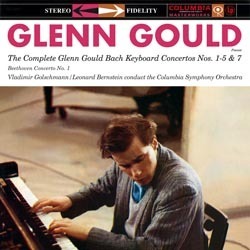 Its always for Gould fans and audiophiles, who don’t have everything, weren’t born and/or old enough to be collectors when the originals appeared, finding good quality, reasonably priced originals (from whichever country) is well-nigh impossible, so this box is self-recommending - Classical Source

﻿The attempts that have been made to describe Glenn Gould’s complex personality are endless in number, as are his surprising and often eccentric interpretations. Whether he is considered to be a sensitive maniac, neurotic individualist or uncompromising genius – Gould polarises, provokes and fascinates us long after his death in 1982. As early as 1964 the Canadian pianist ceased to give concerts, since he found appearing before an audience completely unacceptable and preferred to concentrate on studio recordings.

Canadian wunderkind Glenn Gould was the talk of the town in the late '50s and early '60s, and the "Jubilee Edition" of selected albums, with original artwork and notes, revives some of the large amount of music he recorded in those years and fills out the picture of what he was like beyond the solo Bach recordings for which he was most famous. In Beethoven he ranged from daring to completely off the wall. Later on, Gould would outrageously use the concerto format as a way of facilitating his withdrawal from concertizing, but this release was one of his most successful in the field, partly because the sheer stolidity of Vladimir Golschmann's Columbia Symphony Orchestra provides the perfect foil for Gould's excesses. He constantly seems to be racing ahead of the orchestra, seemingly almost pushing it to catch up, and the result is a crisp, fun delineation of the solo and orchestral realms. In the finale of the Beethoven Piano Concerto No. 1, where Gould's rhythmically edgy treatment of the opening solo is answered by a perfectly straight orchestral antecedent, the effect is arresting, and even in the Bach Keyboard Concerto No. 5 in F major, BWV 1056, where the oversized orchestral strings overwhelm the scale of the music,

Way in front of composers of the Viennese Classical era, which he did not take particularly seriously – although his performances keenly reflect Beethoven’s rhythmicity – comes his personal deity: Bach. Gould’s notorious strictness gives form to the minutest of figure in the score. He weaves his way through Bach’s music and thereby articulates its tightly knit and multi-facetted depths. No lecturing keyboard proponent this, but a creative co-composer who imbues the spirit of the music with life and sonority. Upon the release in 1980 of the 80th Birthday Edition with its wealth of visual and tonal material, the music journalist Werner Theurich wrote that »no one had ever played more raptly, or more intensively. That Gould’s performances are nothing but heavenly can be seen and felt.

The rest is pure music. 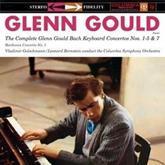