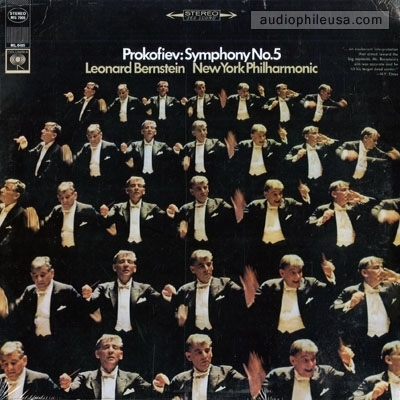 A great remastering of a truly excellent work and performance.Sound 5/5 Audiophileaudition

Prokofiev’s Symphony No. 5 is one of just a handful of traditional Russian works that have advanced to become a celebrated repertoire piece in the area of conflict between socialist artistic realism and conservative modernism. Although, in contrast to his colleague Shostakovich, Prokofiev toed the party line and was highly privileged, which made it very difficult to believe his later claim that his art was free of politics, his music has touched the hearts of concertgoers all over the world.

In the present recording, the cosmopolitan Leonard Bernstein and the New York Philharmonic present the whole beauty of the melodies that unfold in the first movement with full orchestral radiance. Cheerfulness as a “hymn to free and happy Man” is given voice in the clarinet theme of the burlesque second movement with its imaginative changes. Reminiscences of the "Symphonie classique" appear to be intentional. In the finale, Prokofiev proves himself to be a confident master of the classical-romantic canon form, which uses the theme of the first movement and new motifs to create far more than just a melodious apotheosis. Jagged, sharp and percussive final bars round off this supreme orchestral firework, which makes great demands on every single musician.

A great remastering of a truly excellent work and performance.-  The Fifth is probably the most-performed of the seven symphonies penned by Prokofiev for its many lovely melodies and its development work being of a nature that makes it more immediately accessible to the unsophisticated listener. I’m thoroughly familiar with the symphony because in the university I played the bass drum in a performance of it, and there is plenty of bass drum here – especially in the concluding movement.

Somehow after Prokofiev moved back to the Soviet Union in 1933, he failed to have the many problems with the party which his colleague Shostakovich had. He somehow toed the party line and became highly privileged. In this symphony he had a general air of cheerfulness, and saw it as a “hymn to free and happy Man.” This is especially noted in the theme heard on the clarinet in the second movement. The first movement is full of orchestral radiance and a host of great melodies. In this symphony, Prokofiev wanted to get away from the idea most listeners had of his music lacking a lyrical quality.

There are some sarcastic sounds here and there, which Prokofiev got away with throwing in once in a while, and the final movement is full of jagged and percussive sounds that make great demands on all the musicians in the entire orchestra. The spread across the stereo speakers of the instruments of the orchestra and their location is excellent – never mind the poorer separation between the two channels of the vinyl disc as compared to digital.

Most of the Columbia recordings, including all of the Bernstein ones, suffer from a rather glassy sound, especially in the louder sections. Perhaps this was an attempt to sound higher-fi on the poor phono cartridges in most turntables during this period. (The Living Stereo recordings usually don’t have this problem.) This has been carefully minimized in the remastering of the original tapes made in New York’s Lincoln Center Philharmonic Hall to vinyl by Ray Staff at AIR. While the Sony Classical CD reissue in “The Royal Edition” (No. 64) also contains the “Classical” Symphony of Prokofiev, and is remastered using 20-bit technology, it still suffers from the glassy sonics which are noticeable most on the louder climaxes and which the vinyl doesn’t completely eliminate but makes much easier to take. There is also an original Living Stereo vinyl, RCA Victor LSC-2272, of the Symphony No. 5 recorded by Jean Martinon and the Paris Conservatoire Orchestra. It is a 1959 release and is free of the glassy sonics, but is not quite as exciting a performance as the Bernstein 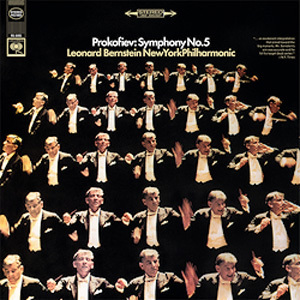 20 Years pure Analogue
Are your records completely analogue?
Yes! This we guarantee!
As a matter of principle, only analogue masters are used, and the necessary cutting delay is also analogue. All our cutting engineers use only Neumann cutting consoles, and these too are analogue. The only exception is where a recording has been made – either partly or entirely – using digital technology, but we do not have such items in our catalogue at the present time
Are your records cut from the original masters?
In our re-releases it is our aim to faithfully reproduce the original intentions of the musicians and recording engineers which, however, could not be realised at the time due to technical limitations. Faithfulness to the original is our top priority, not the interpretation of the original: there is no such thing as a “Speakers Corner Sound”. Naturally, the best results are obtained when the original master is used. Therefore we always try to locate these and use them for cutting. Should this not be possible, – because the original tape is defective or has disappeared, for example – we do accept a first-generation copy. But this remains an absolute exception for us.
Who cuts the records?
In order to obtain the most faithful reproduction of the original, we have the lacquers cut on the spot, by engineers who, on the whole, have been dealing with such tapes for many years. Some are even cut by the very same engineer who cut the original lacquers of the first release. Over the years the following engineers have been and still are working for us: Tony Hawkins, Willem Makkee, Kevin Gray, Maarten de Boer, Scott Hull, and Ray Staff, to name but a few.
At the beginning of the ‘90s, in the early days of audiophile vinyl re-releases, the reissue policy was fairly straightforward. Companies such as DCC Compact Classics, Mobile Fidelity, Classic Records and others, including of course Speakers Corner, all maintained a mutual, unwritten code of ethics: we would manufacture records sourced only from analogue tapes.
Vinyl’s newfound popularity has led many other companies to jump on the bandwagon in the hope of securing a corner of the market. Very often they are not so ethical and use every imaginable source from which to master: CDs, LPs, digital files and even MP3s.
Even some who do use an analogue tape source employ a digital delay line, a misguided ’80s and ‘90s digital technology that replaces the analogue preview head originally used to “tell” the cutter head in advance what was about to happen musically, so it could adjust the groove “pitch” (the distance between the grooves) to make room for wide dynamic swings and large low frequency excursions. Over time analogue preview heads became more rare and thus expensive.
So while the low bit rate (less resolution than a 16 bit CD) digital delay line is less expensive and easier to use than an analogue “preview head”, its use, ironically, results in lacquers cut from the low bit rate digital signal instead of from the analogue source!
Speakers Corner wishes to make clear that it produces lacquers using only original master tapes and an entirely analogue cutting system. New metal stampers used to press records are produced from that lacquer. The only exceptions are when existing metal parts are superior to new ones that might be cut, which includes our release of “Elvis is Back”, which was cut by Stan Ricker or several titles from our Philips Classics series, where were cut in the 1990s using original master tapes by Willem Makkee at the Emil Berliner Studios. In those cases we used only the original “mother” to produce new stampers.
In addition, we admit to having one digital recording in our catalogue: Alan Parsons’ “Eye in the Sky”, which was recorded digitally but mixed to analogue tape that we used to cut lacquers.
In closing, we want to insure our loyal customers that, with but a few exceptions as noted, our releases are “AAA”— analogue tape, an all analogue cutting system, and newly cut lacquers.
PALLAS
Audiophile Vinyl - Made in Germany  For over 60 years the family business in the third generation of the special personal service and quality "Made by Pallas" is known worldwide. Our custom PVC formulation produces consistently high pressing quality with the lowest surface noise in the industry. Our PVC complies with 2015 European environmental standards and does not contain toxic materials such as Lead, Cadmium or Toluene. Our vinyl is both audiophile and eco-grade!
Browse this category: CLASSICAL
Contact information
Prokofiev - Symphony No.5 : Leonard Bernstein : New York Philharmonic Orchestra - 180g LP - SCOTT NANGLE AUDIO
T&C's and Privacy Policy