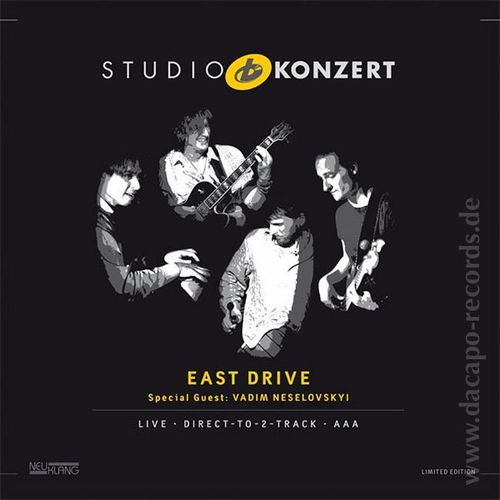 'Audiophile' has mutated into an inflationarily used term, which is also said to give a seal of approval to some semi-baked production. But it applies to this record.5/5 Stereo Magazine

Philipp Bardenberg, the bass player of the Jazzcombo Eastdrive, makes a wise observation in his liner notes on this album: a direct-cut recording in front of the audience like this is the synthesis of live situation and studio. It offers the energy and spontaneous interaction of the live performance, but also demands the inexorable perfection and precision of the studio recording. However, Eastdrive is a combo, which is audible in both terrains. The band, which is filled with electric bass, guitar and drums, enriches its exciting electric sound, which is a little bit more funky and somewhat more experimental version of EST by a guest on the piano: Vadim Neselovsky (with his own trio; Eastdrive Drummer Bodek Janke, on a separate release of the New Sounds Studio Concert Series). This gives an almost explosive sound mixture, which was perfectly captured by the Bauerstudios engineers and transferred directly to the cutting machine. Sound and musically very first cream. Vinylde
Limited and numbered exclusive vinyl record. Absolutely recommendable.

"The studio concerts of Neuklang have always impressed the audience with what great recording techniques are capable of.

A concert of the trio Eastdrive, which enriched its exciting and at the same time melodic jazz with ethnic elements (...), was recorded live. Not in any jazz cellar, but in the prestigious peasant studios, which offer acoustically and technically optimal conditions. "(Stereo, )

"Contemporary jazz meets Eastern European melodies: surely this melange is not new - but in the sophisticated compositions of the Trios Eastdrive it is audible and enthralling." (Münchner Merkur)

"Audiophil" is mutated into an inflationary term, which is also to be awarded a seal of quality for many semi-productions. On this record, however, he meets. "(Stereo )

" You sound saturated with Eastern European coloring (...) is saturated with such over-arching joy of life, of great interplay that the almost forty minutes pass by as if in flight the whole thing would have appeared as a double LP. " (Jazz Podium )