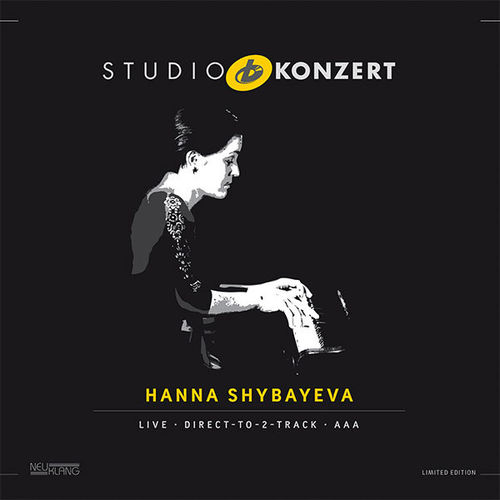 It is deeply impressive how Hanna Shybayeva reproduces here the different characters of these 14 compositions. Whether deliberately discreet or energized wild - this pianist dominates the so different totals brilliantly. It is simply a pleasure to listen to it, even as a non-classical person. It is nevertheless to a large part in the high-quality, purely analog recording in the Bauer Studios, that this LP so highly recommended! Vinyl Fan

With this release, the studio concert series of the label "Neuklang", which has meanwhile become legendary, has entered a new exciting phase. Until now, mainly jazz ensembles, So here with Hanna Shybayeva stands for the first time a classical musician before the microphones and the audience. Under her hands, the Steinway wing of 1927, which was already played by Keith Jarrett, rises to new heights. A cleverly constructed concert program chronologically follows the history of the solo piano literature: Couperin, Scarlatti, Chopin, Debussy, Gershwin and finally the contemporary composer Nicolaj Kapustin. The focus is sometimes on the dancers' gesture of the baroque pieces or the Mazurkas of Chopin, but on the whole, it is above all an intimate, calm and dreamy tone that determines the picture. As a sound, this LP is always first class: hardly any instrument can be as complex as a concert grand piano, but here every sound fits exactly where it belongs. The finest - Hifi Test

So Hanna Shybayeva decided to a solo performance , which was recorded live on 2-track tape

But when the Dutch pianist Hanna Shybayeva learned about the "studio concert" concept at the Bauer Studios, she was thrilled. The concert experience is the energy impulse for the pianist for her expressiveness.

Already in her youth, the native of Belarus was honored with numerous European and American music awards and called "Wunderkind" on the piano. At the STUDIO CONCERT on 29 February 2016, Shybayeva impressively demonstrated that she has grown from a miracle child to a grand pianist.
She became the first classical musician of a studio concert at the Steinway grand piano in the large studio in Ludwigsburg and played an extremely demanding program through the different epochs. True to the motto " Let's Dance ", Shybayeva offers not only the compositions of Claude Debussy or Frédéric Chopin, but also works by Baroque composers such as Domenico Scarlatti or François Couperin . Shybayeva showed this evening that it was not only the energy of the audience for highly energetic music Interpretations, but also that the dancing element is drawn through the entire musical history.

She was considered a miracle child. Born in 1979 in a family of musicians in Minsk / Belarus, Hanna Shybayeva started her career as a pianist as a 6-year-old. Since then, she has won several international competitions and has received outstanding accolades (eg from UNESCO and Yamaha Music Europe). Since 1999 she has lived in the Netherlands.

On the evening of the 29th of February, 2016, she finally sat in front of the Steinway wing in Studio 1. It was certainly clear that it was a musical challenge to record a recording without the possibility of subsequent editing. Every tapes recorded during the studio concerts are produced one by one as a record. There is no Take 2 or even Take 3, everything goes (including possible errors) on the later LP to be purchased!
Ms. Shybayeva also understood this as a way to prove her ability. For a live concert is undoubtedly already such an opportunity - the increase of this is however just such a Livemitschnitt, which offers the expert music listener and vinyl fan the exact control of this performance. The concert is unique,

THE STUDIO CONCERT BY HANNA SHYBAYEVA UNDER THE MAGNIFYING GLASS

It is all the more fascinating to take a closer look at the 14 pieces of this record. Hanna undertook a journey of time, from contemporary compositions to the world of baroque music. The LP - by the way, the first classical recording in the context of this studio concert series - starts with works by François Couperin and Domenico Scarlatti , which lead us musically into the 18th century. The cheerful ease of Couperin's pieces ends in the somewhat melancholic sonata of Scarlatti, which was interpreted with great emotion by Hanna Shybayeva. The ensuing three Mazurkas by Frédéric Chopin offer an exciting range of folkloristic influences (Op. 50: 1), through an easygoing, dancer-oriented op. 50/2 to the demanding and intense op. 50/3 - presented by Hanna masterfully.

We continue with the set of the Sarabande from the Suite " Pour Le Piano " by Claude Debussy - a slowly played dance of probably southern origin, played very gracefully, but the subsequent preludes of George Gershwin go much more in a more modern direction, both dancers like Including the three movements of the piano sonata No. 6 of the Ukrainian composer and pianist Nicolaj Kapustin , both from a dynamic and a fine point of view.

It is deeply impressive how Hanna Shybayeva reproduces here the different characters of these 14 compositions. Whether deliberately discreet or energized wild - this pianist dominates the so different totals brilliantly. It is simply a pleasure to listen to it, even as a non-classical person. It is nevertheless to a large part in the high-quality, purely analog recording in the Bauer Studios, that this LP so highly recommended!