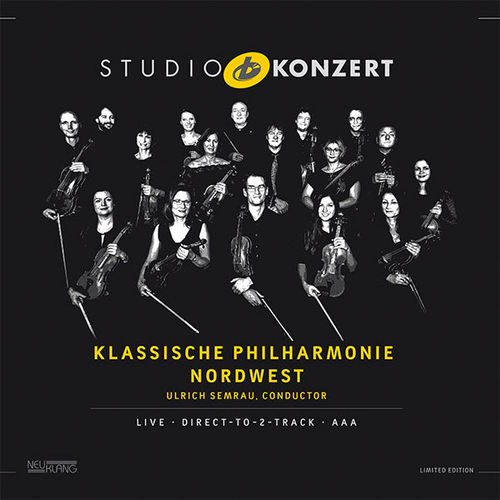 A studio concert with selected works of romantic strings: the Holberg Suite Op. 40 and the second movement from the two elegiac melodies Op. 34 by Edvard Grieg, and the Serenade for Strings Op. 22 by Antonín Dvorák.

Once again, Neuklang is taking a new step in the studio concert series. Jazz combos, big bands, classical soloists were already in live studios before live microphones, but a whole orchestra? Never - until now. Founded in 1996, the Classical Philharmonic of North-North-West sent her string section in chamber orchestration to record Grieg's strings "From Holberg's Time" and "Zwei Elegische Melodien" as well as Dvorak's Streicherserenade op. Tonally a real challenge for sound master Daniel Keinath - in the relatively small studio hall for an orchestra, he succeeded in capturing a warm, dry, transparent and tremendously direct string sound, which supported the sober and yet sensitive performance of the Philharmonic. An exciting record!

A STUDIO CONCERT with chamber orchestra - what a challenge to the classical musicians and the recording team! The conductor Ulrich Semrau, who founded the Classical Philharmonic Northwest in 1996, was so enthusiastic about the idea of ​​a direct-to-2-track live recording that the orchestra made their way from Bremen to Bauer Studios in Ludwigsburg.

On January 30, 2017, they gave a studio concert with selected works of the romantic strings: the Holberg Suite Op.40 and the second movement from the two Elegic Melodies Op.34 by Edvard Grieg, and the Serenade for Strings Op.22 by Antonín Dvořák , Inspired by the concentrated and expert audience, the orchestra faced the great challenge of recording the performance without any subsequent corrections and adaptations for a STUDIO CONCERT record. Tonmeister Daniel Keinath decided for a main microphone set-up with few supporting microphones. The space and live atmosphere were captured by other room microphones. This resulted in a wonderfully intimate orchestral sound, which directly gave the listener the concert event and gave him the "best audience". The high-quality microphones and the analog recording technology convey the full dynamic and transparency. Spontaneous, lively, authentic - the classical Philharmonic Northwest now as STUDIO CONCERT vinyl.

STUDIO KONZERT is the audiophile Direct-To-2-Track fully analogue recorded concert series, produced by the Bauer Studios since early 2013 and available in shops as numbered and limited 180g vinyl records with a premium-quality packaging.

STUDIO KONZERT: That is our large atmospheric recording room, which inspired numerous firstclass artists. That is also extreme concentration and highly motivated artists for this very special moment. It is an attentive audience captivated by the fascination of this moment. This is the only way to create such fascinating moments in a very special concert situation.

STUDIO KONZERT: That are experienced sound engineers who conduct the acoustic brilliance with our first-class studio equipment: precious microphones, analogue effect devices and our clear, analogue Neve mixing console. Our Studer A 820 tape-records in a unique “direct-to-2-track” way.