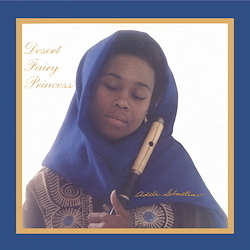 One of our favorite records ever on the legendary Nimbus label – a special home to spiritual jazz on the west coast at the end of the 70s – and crucial for giving us some really unique talents like this! Adele Sebastian may have only ever cut this one album as a leader, but she's a hell of a flute player with a very deep, spiritual vibe – these sublime lines that soar and stretch out over modal rhythms – played by a totally hip group that includes Rickey Kelley on vibes, Roberto Miranda on bass, and Billy Higgins on drums and a bit of gembreh – a string instrument that brings a nicely exotic vibe to the record. The group's rounded out by Bobby West on piano and Daoude Woods on percussion – and the songs have this open flow that's wonderful – never too far out, but always searching – as the group soar through a version of McCoy Tyner's "Man From Tanganyika", plus the tracks "Desert Fairy Princess", "Belize", "Prayer For The People", and "Day Dreamer"

Adele Sebastian was an Afro American jazz flutist and singer, active from the early 70s  (when she was still a teenager) until her untimely death at the age of 27 (!) in 1983 from a kidney failure. In fact she had been depending on monthly dialysis to stay alive for years. She lived through and for the music and you can hear it on her only solo album “Desert Fairy Princess” which was first issued in 1981. The mostly acoustic instrumentation brings a very natural and therefore rather retrospective sound considering the year the album was recorded. Adele and her band pull it off right from the start as if it had been 1966 and it was time for a revolution to shake the dust from the old time jazz. In a perfect way she mixes classic American vocal jazz elements with playful and more free passages, Latin music and tribal African sounds in the lengthy and quite rhythm oriented “Man From Tanganyika”  and makes the title track start with a mystical “Allahu akbar“ chant while it turns more and more into a dark and gloomy song with something like a psychedelic edge reminiscent of Pharoah Sanders on his early works. Wild rhythms from drums, percussions with tons of bells and chimes weave a thick groove carpet and conjure a magical atmosphere. Those jazz aficionados who love the mid 60s John Coltrane, his sidekick Pharoah Sanders and Alice Coltrane will go crazy for this album.

Selections:
Side A:
1. Desert Fairy Princess
2. Belize
3. I Felt Spring
Side B:
1. Man From Tanganyika
2. Day Dreamer
3. Prayer For The People

Audiophile Vinyl - Made in Germany  For over 60 years the family business in the third generation of the special personal service and quality "Made by Pallas" is known worldwide. Our custom PVC formulation produces consistently high pressing quality with the lowest surface noise in the industry. Our PVC complies with 2015 European environmental standards and does not contain toxic materials such as Lead, Cadmium or Toluene. Our vinyl is both audiophile and eco-grade!
Browse this category: JAZZ
Contact information
Adele Sebastian ‎- Desert Fairy Princess - 180g LP - SCOTT NANGLE AUDIO
T&C's and Privacy Policy