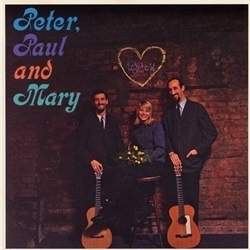 Bernie Grundman cut from the original master tape and the transparency and clarity are a dead giveaway to that. If this album doesn't produce occasional chills, your system needs some work or you do! A long awaited reissue  done perfectly!" -Michael Fremer, analogplanet Music 9/10, Sound 9/10

Bernie Grundman cut from the original master tape and the transparency and clarity are a dead giveaway to that. If this album doesn't produce occasional chills, your system needs some work or you do!

This ORG 45-rpm audiophile vinyl has excellent sonic balance and depth. The blend of vocal timbres is flawless. As the volumes increase and abate, the three-part harmony focus remains consistent. Stereo balance is precise and the acoustic guitars radiate quiet warmth. - Sound 5/5 AudioPhileAudition.

Peter, Paul and Mary's self-titled debut album was originally released in May of 1962 and contains the ever-popular folk song "If I Had A Hammer."

"There is nothing apologetic about their work. No ineptitude disguised as charm. No uninspired professionalism passed off as authenticity. Whatever they have thus far undertaken, Peter, Paul and Mary have done well, and with flair. And, obviously, with their whole hearts. The temptation is to run on in a riot of superlatives. Probably, you're either reading this instead of listening, or else reading and trying to listen at the same time. Either way, it's a mistake. The truth is on the record. It deserves your exclusive attention. No dancing please. Just look at their faces, listen to their songs, and hope that you have a chance to hear (and see) them in person).

"These dynamic youngsters have been together almost a year now (by spring '62 when this is being written), and each day seems to bring new definition to that word... together. The trio has elsewhere been described, visually, as 'Two bearded prophets of the folk idiom in league with a bright, young blonde-and-a-half.' And vocally, as 'An angel, and two cellos playing guitars.' Beyond such imagery, such facts as birthplaces, hobbies, ages, and last names are unimportant here. Their identities as artists, both individually and collectively, are emphatically established on the record inside. By way of rounding out the biography, let's just add that what they do in their spare time is sing.

"More important than biography, there seems to be something optimistic, something encouraging about this whole musical experience. Peter, Paul and Mary's first album is bright with enthusiams. No gimmicks. There is just something good about it all. Good in the sense of Virtue, that is. And the news that something this good can be as popular as this is can fill you with a new kind of optimism. Maybe everything's going to be all right. Maybe mediocrity has had it. Maybe hysteria is on the way out. One thing for sure in any case: Honesty is back. Tell your neighbor." - Original Album Liner Notes

None sound as good as this reissue, starting with RTI's black backdrops. So much more low level detail gets revealed, especially the two acoustic guitars in the left and right channels. Mary's voice is better focused in the center and she's far more clearly rendered in three-dimensional space.
Bernie Grundman cut from the original master tape and the transparency and clarity are a dead giveaway to that. If this album doesn't produce occasional chills, your system needs some work or you do! Sound 9/10 Music 9/10 AnaloguePlanet 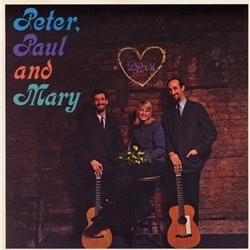