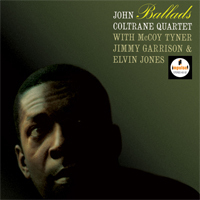 Ballads, released in 1962, was originally seen as John Coltrane's answer to critics who claimed that his work was too complicated. This beautiful and melodic set finds Coltrane responding with an introspective sound in his continual search for artistic enlightenment. With a rhythm section comprised of McCoy Tyner, Jimmy Garrison, and Elvin Jones, Coltrane is free to deliver the kind of jazz music that offers universal appeal and lasting greatness.

A giant of modern jazz, John Coltrane played in Dizzy Gillespie's orchestra, with Eddie Vinson's band and most notably with Miles Davis. He inspired and influenced many younger musicians with his distinctive and often adventurous playing. This quartet was formed in 1961.
"When John Coltrane was asked, "Why a ballads album?", he said "Variety." Meaning a change of pace.  And perhaps he wanted to apprise those who haven't discovered that he can be lyrical. John played the tunes straight, in the in-choruses, unless you count his lovely phrase endings as deviations from melody.  When the development occurred, he made his musical points quickly and succinctly. I'd never heard him play this tightly." - Gene Lee / liner notes
These eight ballads made people stop and listen with real pleasure. »Have you heard him? He can blow the notes properly, the pianist knows all the harmonies, and the drummer does far more than just bash!« These words were to be heard and read everywhere, in the specialist magazines, and in the jazz clubs from New York to Tokyo.
All the themes are taken from the American Songbook, from musicals, and well-known numbers performed by Frank Sinatra, Johnny Mathis, Ella Fitzgerald and Peggy Lee among others.
All of them have been performed time and time again and although the musicians played the themes for the very first time at the recording session, their interpretation was well structured while at the same time fresh and intense. With the exception of just one number, all the titles were a complete success at the very first take; but that is not merely that which underlines the high musical standard of the quartet.
Fans and critics alike have continued to hold this early Impulse production in high esteem to this very day, which is certainly due to the producer Bob Thiele. But a great part of the album’s success is also due to the excellent work of the recording engineer Rudy Van Gelder, who has captured the intimate atmosphere with his microphones.
Recording: December 1961, September and November 1962 at Englewood Cliffs, NJ,
ORG is proud to present the ORG Ultimate Edition, a brand new series of great LP titles from the Impulse, Verve jazz and Chess blues catalogs. Cut at 45RPM by Bernie Grundman on his newly upgraded mastering system and tube powered lathe, these LPs will be plated and pressed by Pallas in Germany and sleeved in deluxe heavy duty gatefold jackets printed in Europe. They represent the very finest examples of the vinyl LP format available today.

Musicians: John Coltrane, tenor & soprano saxophone McCoy Tyner, piano Jimmy Garrison, bass Elvin Jones, drums Selections: 1. Say It (Over and over Again) 2. You Don't Know What Love Is 3. Too Young to Go Steady 4. All or Nothing at All 5. I Wish I Knew 6. What's New? 7. It's Easy to Remember 8. Nancy (With the Laughing Face) 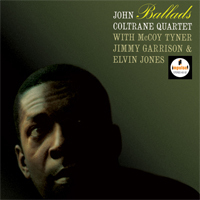