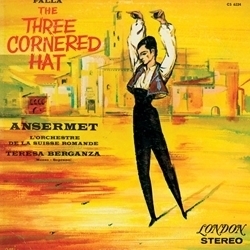 "The soundscapes are huge -- wall to wall and as deep as your audio system will provide. Horns cascade, tympani is quick-paced and taut, and strings resound in mass while achieving adept delineation. Dynamics are massive yet scale up and down nimbly and smoothly." - Marc Mickelson, www.theaudiobeat.com,  5/5 Sound!!!

The timeless gem Three Cornered Hat performed by L'Orchestre de la Suisse Romande, conducted by Ernest Ansermet. This is a performance to be known as 'one of the greats.' The composition was premiered by Ansermet, and with its lively rhythms, subtle narratives, dynamic development, and vivid contrast and tone-colors, this version is a masterly performance that no other performances have been able to exceed. The performance illustrates an ethnic taste that is rich in wild beauty in a truly vivid and dynamic way, while highlighting the lyricism of Falla's music in a sophisticated, uncompromising manner. The solo singing by the young Berganza is also of note here.

"...the most important reason to cut LPs at 45rpm is improved sound, and the ORG Falla The Three-Cornered Hat  reissues deliver in abundance. The soundscapes are huge -- wall to wall and as deep as your audio system will provide. Horns cascade, tympani is quick-paced and taut, and strings resound in mass while achieving adept delineation. Dynamics are massive yet scale up and down nimbly and smoothly.

I have a dozen or so original Blue Backs, some recorded in the same venues as these titles, but none conveys the sense of the whole orchestra and the individual musicians as well as these LPs. In fact, I don't think I've ever heard an orchestra captured with greater expansiveness and focus. While one of these recordings is over 50 years old and the other is almost there, they both sound fresh, and the music is exhilarating, even for those who don't generally listen to orchestral recordings." - Marc Mickelson, theaudiobeat.com 4/5 Music, 5/5 Sound!!!

Manuel de Falla was one of Spain’s most popular 20th century composers. This rousing 2-LP set from ORG shows why. His Sombrero de tres picos (or Three-Cornered Hat) is a spirited ballet with clear echoes of its flamenco roots, beginning with opening olés and castanets. It’s complemented by a cameo appearance—complete with birdcalls—from the great Spanish mezzo-soprano Teresa Berganza. Swiss conductor Ernest Ansermet, leading his personal band, the Suisse Romande Orchestra, premiered the piece in 1919, which helps makes this 1961 recording the definitive reading. It’s obvious from every bar recorded here that Ansermet possessed a natural affinity for Spanish music. I have the original London blueback recording, long considered a sonic spectacular.
ORG reissued this classic over four LP sides, and also included two selections from Falla’s opera La Vida Breve. The advantages of the 45RPM mastering and silent surfaces are plain as day. The label’s engineers also tamed the brightness that was typical on some early London LPs. Just listen to “Miller’s Dance” with its pounding rhythms and massed strings, the saucy quote from Beethoven’s 5th Symphony, or the concluding “Jota,” with its sharp brass attacks and bass drum thwacks. As good as the original recording was—and still is—ORG managed to improve a legendary recording that I did not think could be bettered. Spanish music aficionados need to put this LP set on their short list of essential purchases.  —Lawrence Devoe Toneaudio 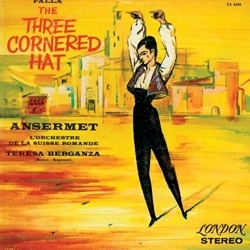