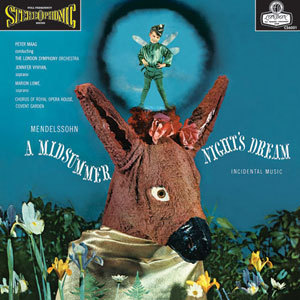 The marvelous Swiss conductor Peter Maag leads the London Symphony Orchestra performing Mendelssohn's "Scotch" or "Scottish" Symphony, recorded in 1960. A gloriously warmhearted and energetic performance, Maag's interpretation has set the recorded standard for this work! The recording captures wonderful chemistry between Peter Maag and the London Symphony Orchestra. It's Mendelssohn performance at its best, which is saying a lot!

"Peter Maag conducts a delightfully fresh "Scottish" Symphony, keeping tempos moderately brisk, textures lean, and phrasing intuitive - that is, everything flows easily and logically. ...Decca's 1960 recording of the symphony is full and clear with plenty of depth" - Victor Carr, classicstoday.com

the Mendelssohn will still give your system a workout. Given that the original Blue Back was a wonderful recording to begin with, ORG’s decision to remaster at 45rpm moves "wonderful" into the realm of "superb." Dynamic swings abound in this piece, so if your system is up to the task, you’ll hear the full effect. The stereo spread is naturally rendered, both in terms of depth and especially width. - Audiobeat