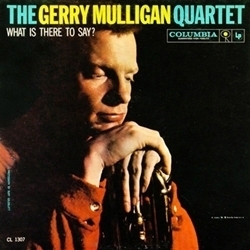 The ORG LPs cream my near-mint six-eye pressings, and there's nothing more to say than that. TheAudioBeat Review

The reissue was mastered by Bernie Grundman, who has his signature proudly etched unto each of the four sides.  If you have a high quality high-end turntable system and are a cool jazz fan, you will have to have this album in spite of its high cost.  Sound 5/5 Audaud

Recorded over several days in 1958 and 1959, 'What Is There To Say?' is one of the ﬁnest cool jazz records you'll ever hear. Teaming up as a quartet, baritone sax-player Mulligan and co. play 8 tunes, featuring Art Farmer on trumpet, Bill Crow on bass and Dave Bailey on drums. His last 'pianoless' album, this record oozes the fun and laid-back vibe that must have permeated the studio during these sessions. Mulligan himself writes in the liner notes: '… maybe we could launch a little enthusiasm and restore fun to its rightful place in jazz'.

The last of the pianoless quartet albums that Gerry Mulligan recorded in the 1950s is one of the best, featuring the complementary trumpet of Art Farmer, bassist Bill Crow, and drummer Dave Bailey along with the baritonist/leader. This recording is a little skimpy on playing time but makes every moment count. Virtually every selection is memorable, with "What Is There to Say," "Just in Time," "Festive Minor," "My Funny Valentine," and "Utter Chaos" being the high points.

"The album is sonically superior... Altogether a wonderful reissue cut by Bernie Grundman from either the master tape or a flat transfer of the master. Either way, great sound and ideal cocktail hour or late night "end of the day" music that's easy to recommend to both jazz aficionados and casual jazz enthusiasts alike. " - Michael Fremer, www.analogplanet.com, Music 9/10, Sound 9/10! " There is little doubt that Gerry Mulligan was the greatest baritone sax player. He could hang musically with just about everyone... This is one of the better-sounding late-'50s Columbia sessions... The horns' up-close perspective provides a sense of vividness... The stereo Original Recordings Group reissue has two important technical advantages over either original pressing. The first is the faster playback speed, which makes for a less crowded groove and greater density of musical information. The horns sound both bigger and more complete, possessing a rounded fullness that neither original conveys, and the drums now anchor the center. The second advantage is the fact that the reissue was cut with the RIAA EQ curve instead of Columbia's house curve... The reissue sounds well balanced and complete -- simply better. How much better? Well, no reissued CD, no SACD, will offer an equivalent level of improvement over an earlier version -- not even close, in fact. And while you can certainly change the sound with a different amp or speaker, you still won't retrieve the musically significant detail from the originals that this reissue makes plain. Put another way, the ORG LPs cream my near-mint six-eye pressings, and there's nothing more to say than that." - Mark Mickelson, theaudiobeat.com, 4/5 Music, 4.5/5 Sound