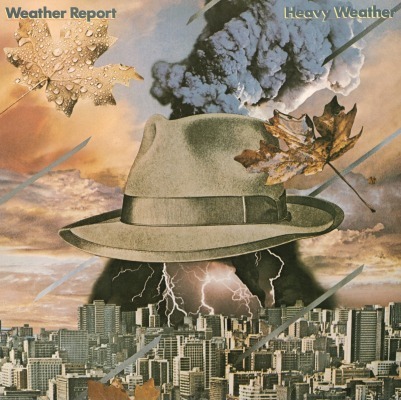 Featured in Michael Fremer's Heavy Rotation in the January 2012 Issue of Stereophile!

ORG’s pressing is silky smooth, the percussion is more listenable and handclaps natural, no longer sounding like someone beating a stick against a wall. Shorter returns to playing with the band, and overall balance is restored. The added dynamics gleaned from spreading the recording out onto a pair of 45RPM discs brings out new feelings of excitement. Pastorius’ bass riffs snarl with authority, Shorter’s sax flows through the soundstage, and the rest of the players’ contributions disclose the presence of a spaciousness this recording never had before. Another triumph from ORG.  -Jeff Dorgay Toneaudio

Weather Report’s biggest-selling album is that ideal thing, a popular and artistic success – and for the same reasons. Released just as the jazz-rock movement began to run out of steam, this landmark album proved that there was plenty of creative life left in the idiom. This powerhouse super group, comprised of Joe Zawinul, Jaco Pastorius, Wayne Shorter, Alex Acuna and Manolo Badrena, delivered their only certified-Platinum release with this killer cut.

The album features the jazz standard "Birdland" and was Columbia's best-selling jazz albums. "When a 45rpm reissue of Weather Report's Heavy Weather arrived, it went right on . I haven't played the original in way too many years, but I thought I knew Joe Zawinul's "Birdland" pretty well from hearing it often when it was first issued, in 1977. But I really did not know "Birdland"!

This reissue produces an exceptionally wide stage with ear-popping three-dimensionality. It sounds as if the recording engineer and mixer were purposely manipulating certain elements in order to produce such vivid dimensionality. Instrumental separation was also pronounced." - Michael Fremer, Stereophile December 2011,

ORG has meticulously re-mastered the tapes to 45 rpm analog vinyl with dazzling results. Despite the electric nature of the instruments, the tones are rich and warm. The variety of synthesizer runs is rendered with pristine clarity. Whether an individual note or a textured overdub, the sound quality is distinctive and eminent. Shorter’s saxophone, and in particular the soprano, is subtle and without any shrillness.

Pastorious’ bass has separation from the rhythm section, and is rendered with maximum detail. The overall mix is impressive as each instrument establishes an individual resonance with virtually no distortion." - Robbie Gerson, .audaud.com,

Side A: Birdland; A Remark You Made

Side B: Teen Town; Harlequin
Side C: Rumba Mama; Palladium
Side D: The Juggler; Havona