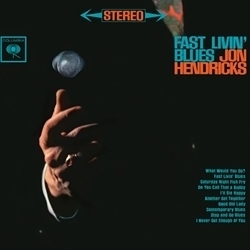 ...this reissue is excellent. It's clean, well focused, good sized, pretty natural, detailed and has excellent dynamic energy. Further, the pressing is dead quiet... Hendricks has a true gift for lyrics, even unique in my experience." - Arthur Salvatore, high-endaudio

Qualities one associates with the jazz vocal group Lambert, Hendricks & Ross - swing, hipness, and witty, offbeat lyrics - were very much in evidence when band member Jon Hendricks released Fast Livin' Blues in 1962. A looser approach, however, allowed more room for the instrumentalists to both stretch out and insert perfectly-timed fills with an air of spontaneity... For someone who has the blues in all kinds of ways, the front man sure seems to be having a good time, spinning tales of friendship, fast living, and fish fries that will inspire smiles more than sadness. Again I applaud Original Recordings Group for picking a less-than-obvious title that well deserves a reassessment and for capturing a natural sound on noise-free 180-gram 45rpm pressings. Every time the horn section kicks in, it's exquisite - rich, sweet-sounding brass in all its glory." - Music 3.5/5, Sonics 4.5/5 - Jeff Wilson, The Absolute Sound,

Jon Hendricks helped to originate vocalese, which is an art form of adding lyrics to existing instrumentals and replacing instruments with vocalists. He is also considered to be one of the best scat performers of all-time. Jazz critic and historian Leonard Feather called him the "Poet Laureate of Jazz" while Al Jarreau has called him "pound-for-pound the best jazz singer on the planet, maybe that's ever been." After his service in the Army during World War II, Hendricks attended the University of Toledo as a pre-law major. Just as he was about to enter the graduate law program, his G.I. benefits ran out, which forced him to choose a different career path. Recalling that Charlie Parker had encouraged him to come to New York two years earlier to look him up, Hendricks took him up on his offer and moved there and began his singing career. This spirited 1961 jive and blues set from Columbia finds Hendricks accompanied by the likes of Pony Poindexter (soprano & tenor sax) and Billy Mitchell (tenor sax) among others. 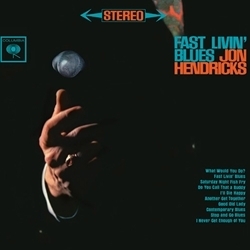