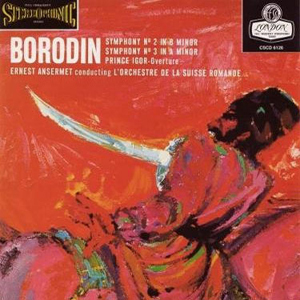 Nothing in the analog realm matches the enhancement of sound quality of 45 rpm pressings except well-done (and now nearly extinct) direct discs. The massed strings are especially gorgeous and natural-sounding. Bear in mind the more frequent getting up to change the recording and its very high price, but if you have a high quality turntable system and love Borodin this is a must-have

Alexander Porfiryevich Borodin was a Russian Romantic composer, doctor, and chemist. He was a member of the group of composers called The Five (or "The Mighty Handful"), who were dedicated to producing a specifically Russian kind of art music. He is best known for his symphonies, his two string quartets, In the Steppes of Central Asia and his opera Prince Igor. Music from Prince Igor and his string quartets was later adapted for the US musical Kismet.
Symphony No. 2 in B minor by Alexander Borodin was composed intermittently between 1869 and 1876. It consists of four movements and is considered the most important large-scale work completed by the composer himself. It has many melodic resemblances to both Prince Igor and Mlada, two theatre works that diverted Borodin's attention on and off during the six years of composition.
Anyone believing in the old adage that science and the fine arts do not mix must rethink his ideas when he becomes acquainted with Alexandr Borodin’s biography and his music. The Russian professor of chemistry constantly stole time from his lectures in order to compose; it was musical elements and formulas rather than chemical ones that occupied him.
Without a doubt, the Second Symphony in B minor best reflects Russian feeling and temperament. Its rather harsh and mechanical theme is contrasted first by a lively little song and later by a conciliatory second subject. Cheerful and soothing melodies are heard in ever new combinations until the main theme returns once again and the movement is brought to a powerful close. The Scherzo, with its throbbing horns, march rhythms and thrilling woodwinds, is equally electrifying. The contemplative Andante is followed by a highly explosive Finale based on two Russian dance melodies which are widely varied during the course of the music.
Both old and new friends of Russian symphonic music are highly recommended to experiment in their own “sitting-room laboratories” with this musically and chemically pure vinyl pressing. 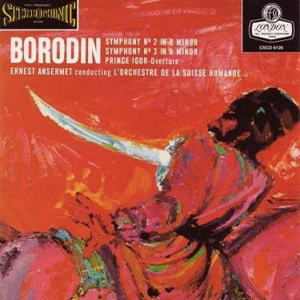