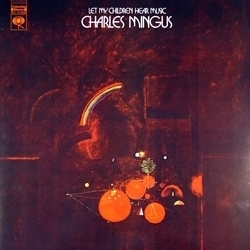 Charles Mingus called this late-period 1972 set “the best album I have ever made.”

Even in the context of the giant's other masterpieces, it's hard to argue with that statement. Let My Children Hear Music is that kind of great.

A large-ensemble effort featuring enterprising arrangements, the record surrounds the bassist/composer with a tremendous orchestra and swirling, glorious structures  with volleying horns, elaborate solos, and introspective moodiness. The most valuable buried treasure in Mingus’ distinguished catalog? Hear the songs for yourself, and decide. ORG Music, however, has made it much easier to arrive at an answer. Why? The sound on this 180g 45RPM 2LP pressing, mastered from the original analog master tapes by Bernie Grundman, practically invites you into the studio. Given proper room, dimensions, and imaging, the instruments and the music they combine to produce, further exposes Mingus' genius and reminds us all once again why sonic transparency equates to emotional realism and soulful revelation.