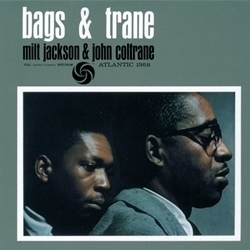 Only Full-Album Collaboration Between Iconic Vibraphonist and Definitive Saxophonist

In collaborating with pianist Hank Jones, bassist Paul Chambers, and drummer Connie Kay, the headliners go for broke, expanding the parameters of two Jackson originals as well as three standards, including Dizzy Gillespie's "Be-Bop" and the staple "The Night We Called It a Day." Upbeat tempos and spirited interplay pulses throughout.

Mastered from the original master tapes, ORG s reissue presents this heralded release in exacting sound, with the instruments given full range and true-to-life imaging that takes you right into New York City's Atlantic Recording Studios when the pieces were recorded in January 1959.