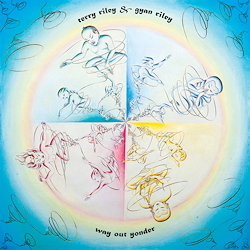 released by ORG Music in a 2-LP pressing that is both quiet and dynamic., but high fidelity really comes in handy when you’re trying to float off into space with this father and son team. Shri Camel sounds a little artificial in comparison–it’s a studio creation, after all. Way Out Yonder was recorded live in three different locations–Quebec, Tokyo and Berkeley. It sounds delightfully present and alive throughout, and knowing that Terry Riley is still alive and making music like this adds a little stability to a wobbly planet.PatTimeAudiophile

"Way Out Yonder" is the second live release of Terry Riley & Gyan Riley, the duo of legendary American composer and minimal music pioneer Terry Riley and his son, guitarist / composer Gyan Riley. The album consists of spontaneous improvisations and compositions by Terry and Gyan, which were recorded during three appearances in Canada, Japan and the US, and puts the older Riley on the piano, singing, melodica and electronics in the foreground. The artwork of the album was created by Barbara Falconer, who also painted the cover of Riley's milestone "Sri Camel" from 1978.

The album will now be released on vinyl for the first time on this double LP, which was mastered by Dave Gardner at Infrasonic Mastering for Vinyl.