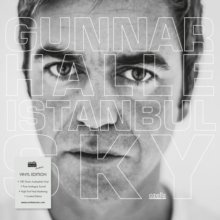 Recorded, mixed and mastered by Jan Erik Kongshaug in the Rainbow Studio in Oslo, Norway.
Edited by Hendrik Pauler at Pauler Acoustics on DMM.

f the conventional jazz world, which is characterized by old music traditions, style quotations and conservative music training, is getting too boring, then Gunnar Halle's new album "Istanbul Sky" is recommended. The Norwegian trumpeter and singer creates his very own musical world in ten tracks. In the center is his falsetto vocals and the trumpet sound somewhere between Chet Baker and Miles Davis, around it an indie-pop, plentiful alternative sound network of electronic sounds and loops, lots of guitars and original percussion, now and then a cello or a vibraphone.

For almost two decades, Norwegian trumpet player/composer Gunnar Halle had served in a wide range of bands (Pierre Dørge & New Jungle Orchestra, Mari Boine, Eivind Aarset Sonic Codex) and yet, in all these years, he had never recorded an album under his own name and direction. He is now presenting his solo debut 'Istanbul Sky' made up entirely of his own compositions and featuring guests such as guitarist Eivind Aarset on three tracks.

In many respects, 'Istanbul Sky' is a post-concept-album, with Halle writing and recording pieces without any other concern other than making them sound the best he possibly could. This implied combining all of his different influences, from his jazz roots to his interest in contemporary electronics. It also meant stepping out into the unknown, trying on new approaches and using his voice more than ever. Despite these twists and turns, the album eventually revealed a concept after all - about Halle finding himself as an artist and believing in his instincts.