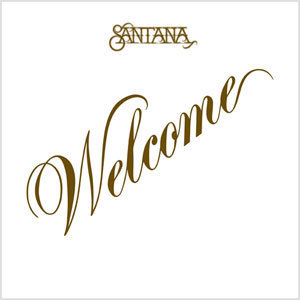 Many of Santana’s rock-addict fans could well have understood the inviting word "Welcome" on the white LP cover as an attempt to break away from the spiritual aura of his previous album "Love Devotion Surrender". And the musicians certainly managed to produce a rich Latin feeling, with such titles as "Samba De Sausalito" and "Yours Is The Light". But luckily their concessions did not alienate them from their die-hard fans in that they came up with a sort of copy of the rhythmical "Caravanserai" .

They truly attempted something new. Encouraged by the success of the jazz-fusion formula created by Miles Davis and his disciples, Santana combined his virtuoso guitar playing with specially chosen electronic features.

The amazingly acrobatic jazz vocalists Leon Thomas and Wendy Haas contributed complicated, quirky parts and the maestro himself vies with John McLaughlin in a dense conflict carried out on their instruments in "Flame Sky".

This is an album with a strong intellectual drive and offers the discerning listener a dazzling blend of Latin, jazz and fusion.

"The mark that the recording of Caravanserai and Love Devotion Surrender had left on Carlos Santana was monumental. The issue of Welcome, the band's fifth album and its first with the new lineup, was a very ambitious affair and was regarded by traditional fans of Santana with even more strangeness than its two predecessors. However, issued as it was at the end of 1973, after Miles had won a Grammy for Bitches Brew and after Weather Report, Return to Forever, and Seventh House had begun to win audiences from the restless pool of rock fans, Santana began to attract the attention of critics as well as jazz fans seeking something outside of the soul-jazz and free jazz realms for sustenance. The vibe that carried over from the previously mentioned two albums plus the addition of vocalist Leon Thomas to the fold added a bluesy, tougher edge to the sound showcased on Caravanserai.

The band's hard root was comprised of Carlos, drummer Michael Shrieve, bassist Doug Rauch, and keyboard king Tom Coster. Add to this the percussion section of Armando Peraza and Chepito Areas as well as a second keyboard by Richard Kermode, and space was the place. The John Coltrane influence that inspired the Santana/John McLaughlin pairing on Love Devotion Surrender echoes here on "Going Home," the album's opening track, arranged by Coltrane's widow, pianist and harpist Alice. The deeper jazz fusion/Latin funk edge is articulated on the track "Samba de Sausalito," and to a much more accessible degree on "Love, Devotion & Surrender," which features Thomas growling through the choruses and also features Wendy Haas, a keyboardist on Love Devotion Surrender who is enlisted here as a second vocalist. In fact, her pairing with Thomas on Shrieve's "When I Look Into Your Eyes" is nothing less than beatific. McLaughlin makes a return appearance here on the stunningly beautiful guitar spiritual "Flame Sky." Brazilian song diva Flora Purim is featured on "Yours Is the Light," a gorgeous Afro-Brazilian workout that embraces Cuba son, samba, and soul-jazz. Welcome also marked the first appearance of French soprano saxophonist Jules Broussard on a Santana date.

He would later collaborate with Carlos and Alice Coltrane on Illuminations. Ultimately, Welcome is a jazz record with rock elements, not a rock record that flirted with jazz and Latin musical forms. It is understandable why Santana punters would continue to be disenchanted, however. Welcome was merely ahead of its time as a musical journey and is one of the more enduring recordings the band ever made. This is a record that pushes the envelope even today and is one of the most inspired recordings in the voluminous Santana oeuvre." - Thom Jurek, allmusic.com 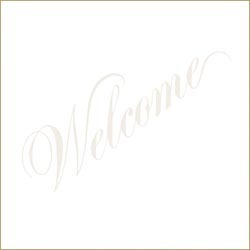