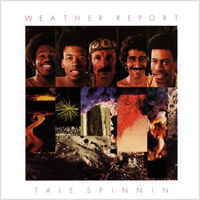 The magic potion "Bitches Brew", which Zawinul and Wayne Shorter had conjured up with Miles Davis, was promising of exhilarating new things to come. The heart-stopping mix of motivic fixed points and exciting improvisations, "the sketchy melodies, all that a synthesizer and other similar electronic devices could offer, combined with a Milky Way of rhythms" (Der Spiegel) was the pathway down which the group went – without ever becoming pure routine. The fifth album, "Tale Spinnin’", is captivating for its wealth of distinctive, often warm, synthesized sounds, which are further enhanced by Wayne Shorter’s bright, twangy soprano saxophone, lending it a jazzy aura.

To be sure, this gripping jazz fusion never progresses steadily all the time, but takes up snatchy, though seemingly familiar, melodic ingredients and combines them to produce a new mixture. "Badia", however, is completely different: a quietly flowing and totally rhythmic ethnic work, which today would be classified as World Music. "Weather Report's ever-changing lineup shifts again, with the somewhat heavier funk-oriented Leon "Ndugu" Chancler dropping into the drummer's chair and Alyrio Lima taking over the percussion table. As a result, Tale Spinnin' has a weightier feel than Mysterious Traveller, while continuing the latter's explorations in Latin-spiced electric jazz/funk.

Zawinul's pioneering interest in what we now call world music is more in evidence with the African percussion, wordless vocals, and sandy sound effects of "Badia," and his synthesizer sophistication is growing along with the available technology. Wayne Shorter's work on soprano sax is more animated than on the previous two albums and Alphonso Johnson puts his melodic bass more to the fore... this remains an absorbing extension of WR's mid-'70s direction."

1. Man In the Green Shirt 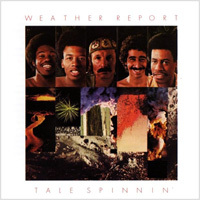