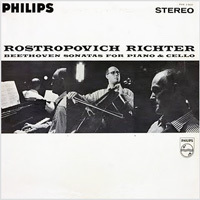 Possessing a complete recording of Beethoven's Cello Sonatas gives far more satisfaction than merely having the set to fill the shelves. On the one hand it offers one the opportunity to compare Beethoven's art of composition at various stages in his life. And on the other hand one can already recognize in the early Opus 5 how he breaks with the traditional sonata in which the solo instrument merely provides an accompaniment and treats the two instruments as equal partners in the creation of the movements.

Richter and Rostropovich devote themselves to their task with verve and freshness. The two early works are marked by the rich and full sound of the cello and an elegantly performed piano part, while the two Russian musicians foster a contemplative, introverted style in the A major Sonata. This respectful approach also lends itself well to the C major Sonata where the free, fantasia-like character with wide-ranging shading is shown off to advantage.

Beethoven's break with the traditional sonata-form layout is carried to extremes in the D major Sonata, where the cello ignores the powerful theme on the piano in the first movement. The work's brittleness is effectively revealed by the two musicians in the transition from the sensitive Adagio to the austere, freely worked final Fugato, while their resolute and analytical approach to the work and technical prowess on their instruments is highly rewarding.

Which brings us to our other contender, the subject of this Speakers Corner double-LP set. Like any live performance, the EMI is less than note-perfect, notable more for its gusto than its precision -- the gusts being a little too strong for some tastes. Rostropovich and Richter, recorded some six years earlier, offer a far more classically correct reading of these complex and involved pieces. Such all-star pairings can fall flat, as the egos compete for attention, but here the two "R"s strike a perfect instrumental balance, passing lead and support roles seamlessly from one to t’other as they effortlessly transit the two decades of musical development that separate the First and Fifth Sonatas. The performance, full of poise, control and contained power, is hard to fault, and if there are bones to be picked, they lie in the recording itself. Devoid of the unavoidable audience noise that intrudes on the EMI set, the Philips also lacks the explicit separation and scaling of the later recording. Instead, the instruments are big, bold and vibrant, full of bottom-end power and weight, but slightly pushed together. It’s a small price to pay for the expressive quality and technique that’s on display, while dynamics and impact are both excellent, the rendering of Richter’s left hand being particularly impressive. Tempi are flawless, and these two stellar performers certainly bring out the best from each other and the score.

So which performance should you go for? With decent original copies of the EMI running out at around £80 a throw, it’s a bit of a moot point. Really, you should have both, so that you can enjoy the contrasting faces on either side of this musical coin. I wouldn’t want to be without the Barenboim/du Pre set, but the availability of a really good reissue of the Richter/Rostropovich is welcome indeed. My original pressing is definitely showing its age, and the Speakers Corner betters it in every department, but most notably in terms of its solid bottom end and smoother, less insistent treble.

RCA, Mercury and Decca might get all the attention in the collectable-record market, but it is a mistake to overlook the likes of Philips, whose early "Hi-Fi Stereo" pressings offer impressive performances by many major artists, captured in powerful recordings of great presence and sonic authority. This set was no exception, and Speakers Corner has done a fantastic job of preserving its virtues. This is one reissue that you can (and should) buy with complete confidence. 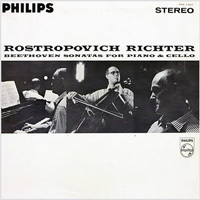