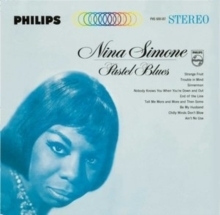 you’ll know you’re hearing a vastly superior edition of the album, both aurally and emotionally. The all analog version's superior three-dimensionality, transparency and attention to the small details produce a "you are there" sensation the digitized versions hide behind a scrim. The originals were never well-mastered or pressed.The sound of both of these records is the best that’s been produced from these tapes and both records are well worth owning.Sound 9/10 Michael Fremer Analogue Planet

Seeking to offer definitive audiophile grade versions of some of the most historic and best jazz records ever recorded, Verve Label Group and Universal Music Enterprises' new audiophile Acoustic Sounds vinyl reissue series utilizes the skills of top mastering engineers and the unsurpassed production craft of Quality Record Pressings. All titles are mastered from the original analog tapes, pressed on 180-gram vinyl and packaged by Stoughton Printing Co. in high-quality gatefold sleeves with tip-on jackets.

This is Nina at the piano, joined by a small band as she ignites a set of late-night torch songs: "Nobody Knows You When You're Down and Out," "Strange Fruit," "Trouble in Mind," her stunning version of "Sinner Man," and more. Originally issued in 1965 by Philips.

Pastel Blues features "Be My Husband" and was written by Andrew Stroud, Simone's husband and manager at the time. She sings it a cappella with her handclapping and a hi-hat as her only accompaniment. The song was later retitled as "Be Your Husband" and covered by Jeff Buckley on Live at Sin-é (2003). Fans of the 1999 film thriller remake "The Thomas Crown Affair" starring Pierce Brosnan and Rene Russo will also recognize the timeless Nina performance of "Sinnerman".  The album also features covers of Billie Holiday songs, "Tell Me More and More and Then Some" and "Strange Fruit".