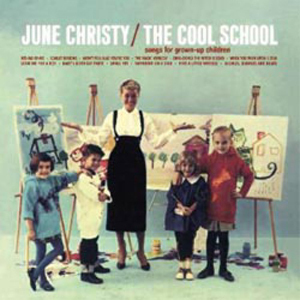 Known for her velvety-smooth vocals overflowing with sweetness, June Christy began her singing career with The Stan Kenton orchestra, replacing Anita O'Day. Her solo career officially began in the mid-1950s with the release of the 10" LP Something Cool. The Cool School, originally released in 1960, was to be her 12th release and features "When You Wish Upon a Star" and "Baubles, Bangles and Beads".

June Christy has been hailed as "one of the finest and most neglected singers of her time" by Richard Cook of the NewStatesman in December 1998.

"The Cool School" remains the most complex and contradictory album in the June Christy catalog: a collection of children's music crafted without sentimentality or saccharine, it brilliantly articulates the confusion, isolation, and yearning that form the core of childhood experience. Equally surprising, the arrangements are the most direct and unadorned of Christy's career, eschewing horns and cotton-candy fluff to focus squarely on her crisp, nimble vocals and the Joe Castro Quartet's driving rhythms. Familiar songs like "Swinging On A Star" and "Looking For A Boy" are stripped of artifice to recapture their innate power and mystery. In short, "The Cool School" celebrates the intelligence of children, and refuses to pander to audiences of any age.

The “Cool School” by June Christy is a very different recording from my favorite Christy album, Something Cool. Something Cool was recorded in 1954, and Cool School is from 1961; still, the latter is more complex and interesting even though it’s a collection of children’s music. Again, even though it’s a children’s album, Cool School is neither over sentimental or childish. The songs are performed with a directness that is refreshing. I found this a really fun listen and a great recording. Thus, it comes highly recommended -Dagogo Review.