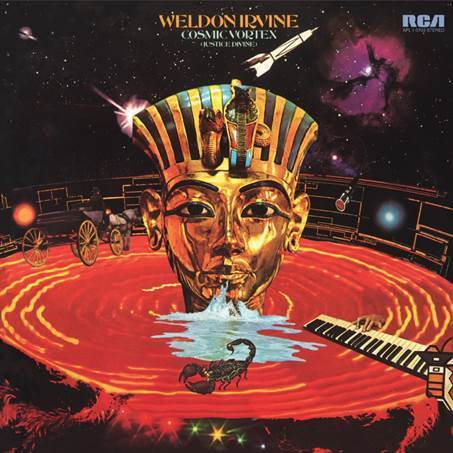 Recorded in 1974, Weldon Irvine performs with a host of musicians for this album of bold, improvisational jazz and funk.

After two visionary LPs for his own tiny Nodlew label, Weldon Irvine signed to RCA for Cosmic Vortex (Justice Divine), exploring the deeply spiritual and political terrain of his previous efforts on the kind of grand musical scale that major-label funding accommodates. This is a big, bold record by any measure, with a startlingly pronounced focus on lyrics and vocals. At the same time, however, the melodies spread out like tentacles, informed by the improvisational sensibilities of jazz and the deep-groove spirit of funk.

A genius bit of work from the legendary Weldon Irvine – a mightily righteous effort that more than lives up to its heady title and cover! After turning out 2 great albums on his own indie Nodlew label, Weldon really steps into greatness with this set – using the bigger budget of his deal with RCA to expand out his musical vision in a number of different directions. Keyboards are still very much at the forefront of his sound

played with that heavily vamping left hand that makes his work so funky – but there's also a focus on lyrics here too – sung by Weldon with support form singers Ojuleba & Nalo, in a way that creates a righteous "many voiced" mode on the lyrical tracks! Things get plenty jazzy on side two, though – and a few key tracks really take off in a heavily jamming way, mixing Weldon's keys with additional reeds, guitar, and percussion

Side 1:
Love Your Brother
Walk That Walk, Talk That Talk
Love Jones
I’ll Name It Tomorrow
Side 2:
Cosmic Vortex (Justice Divine)
Quiet (In Memory Of Duke Ellington)
Let Yourself Be Free
Love Your Brother (Sanctified Version)