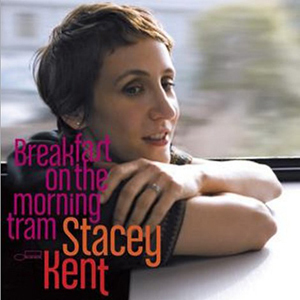 If you are unfamiliar with Stacey… fix that. And if you are familiar… well, I am not telling you anything here you don't already know - .Positive Feedback

"This vinyl remastering of Breakfast On The Morning Train is a perfect vehicle for Kent and her silky voice. Despite the higher pitch, there is great richness and texture. The guitars (both acoustic and electric) have a fuller resonance and complexity. As usual, the glossy packaging and gatefold cover are first-rate." — Audiophile Audition,

Stacey Kent is what men used to call a classy broad. Her elegant fashion sense and understated vocal style make her sound like a woman from another time, an unflappable sophisticate with a warm, slightly world-weary persona. She was born in the United Sates but after a trip to France, she decided to become a jazz singer. In the early '90s she landed in Oxford where she met her husband, musical director/sax player Jim Tomlinson. Tomlinson also produces Kent's albums, and this time out, he composed several charming tunes that sound like potential standards, plus collaborations with lyricist Kazuo Ishiguro, author of "Remains Of The Day". Original tunes like "The Ice Hotel" and "I Wish I Could Go Traveling Again" are full of wry humor, and Kent delivers them with her usual effortless

"This label debut confounds expectations that the singer would spend her whole career producing one finely crafted American Songbook set after another. Husband Jim Tomlinson has produced a delightful post- Peyroux album of warm acoustic jazz-pop full of gentle surprises and exotic touches. Tomlinson's four originals co-written with Kazuo Ishiguro are modest marvels of jazzy elegance." - 4 Stars - Mojo, December 2007
"This jazz disc is vocalist Stacey Kent's first recording project for Blue Note, and it's a thoroughly captivating debut." - Billboard, October 2007
"This vinyl re-mastering of Breakfast On The Morning Tram is a perfect vehicle for Kent and her silky voice. Despite the higher pitch, there is great richness and texture. The guitars (both acoustic and electric) have a fuller resonance and complexity. As usual, the glossy packaging and gatefold cover are first-rate." - Robbie Gerson, www.audaud.com, 4/5 Stars!!
After a dozen albums, singer Stacey Kent has become a household name around the world. It’s four years now since her last solo recording, and with Breakfast on the Morning Tram she leaves the Great American Songbook at home and turns out her most eclectic selection of songs yet, featuring French chansons and Jim Tomlinson originals.  Storytelling has always been Stacey’s forte, so it’s no surprise that she’s chosen a novelist, Kazuo Ishiguro, to write lyrics for her. (Husband and sax player Jim has set them to music.) The four Ishiguro songs on Breakfast On The Morning Tram are sketches of relationships, all narrated by travellers. “The Ice Hotel” is a ballad described perfectly in Stacey’s crisp, clear vocals, while the title track, also by Ishiguro, is faster-paced. Light funk and blues alternate with toe-tapping swing, and it’s packed with comfort-food rhymes (‘pancake’ with ‘heartache’!) that Stacey sings with an audible smile in her voice.
On the Franco-Brazilian “Samba Saravah”, the most upbeat track on the album, Stacey’s intimate vocals dance nimbly with the rhythm section, but Jim Tomlinson’s Getz-ish tenor is a bit pedestrian, while a laid-back arrangement of “Hard Hearted Hannah” comes across more wimp than vamp. Tomlinson’s other arrangements get it right, though, by focusing on the nuance and intimacy that suits his wife’s gossamer voice. He’s back on form with “Landslide”. Stacey makes good, folky sense of this Stevie Nicks torchsong, her dead-on pitch whispering to John Parricelli’s warm and lyrical guitar.    Stacey’s language skills are impressive on the handful of songs she sings, very convincingly, in French. “La Saison des Pluies” is a pearl of a song, Stacey’s little-girl voice shifting the pace gently forward or dragging it slightly back, to a stripped-down accompaniment by Parricelli on guitar. Another gem, “Ces Petits Riens” is treated to a tinge of Piafian vibrato and darkness, against Dave Chamberlain’s elegant plucked bass.
The material and line-up may have shifted on Breakfast On The Morning Tram (pianist Graham Harvey has replaced David Newton and John Parricelli has replaced Colin Oxley) but the product inside the packaging hasn’t changed. Stacey continues to deliver intimate ballads with perfect timing and control.
Musicians:
Stacey Kent - voice
Graham Harvey - piano and Fender Rhodes;
John Parricelli - guitars
Dave Chamberlain - double bass
Matt Skelton - drums and percussion
Jim Tomlinson - tenor sax, alto sax, soprano sax, flute
:
LP1 - Side A:
1. The Ice Hotel
2. Landslide
3. Ces Petits Riens
LP1 - Side B:
1. I Wish I Could Go Travelling Again
2. So Many Stars
3. Samba Saravah
LP2 - Side C:
1. Breakfast On the Morning Tram
2. Never Let Me Go
3. So Romantic
LP2 - Side D:
1. Hard-Hearted Hannah
2. La Saison des Pluies
3. What A Wonderful World 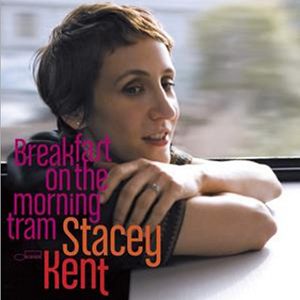