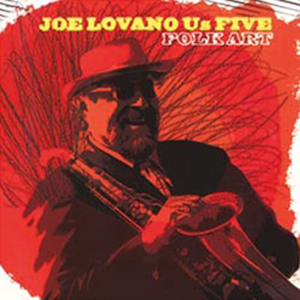 The nine original compositions of Folk Art underline what a treasure to the jazz world Lovano remains.

Jazz is essentially an African-American folk art, elements not lost on Joe Lovano as he presents this all-original program of progressive music. His updated quintet Us Five is one of his freshest units in some time, with bassist Esperanza Spalding, the criminally underrated pianist James Weidman, and two stir-the-pot drummers in Francisco Mela and Otis Brown III. Together they fulfill Lovano's vision as a band that is not afraid to take many chances, stay within a bop-based tradition, and cut loose on many levels in terms of adding diverse elements to this mix of music.

Lovano is noticeably restless, using his reliable tenor sax, but also straight alto, clarinet, and taragato. The drummers not only play their standard kits, but ethnic percussion instruments from many continents, while Spalding is maturing and growing exponentially into a formidable voice on her instrument. Weidman is simply brilliant throughout, largely ignored since his early days with Abbey Lincoln until now, but there's no reason he should be so underestimated or slighted.

Folk Art (2009), Lovano’s twenty-second release for Blue Note has been re-mastered by Pure Pleasure Records to audiophile vinyl. Consisting entirely of original compositions (a first), the project is a free-wheeling amalgam of improvisation and structures. In preparation, the group performed a week at New York’s legendary Village Vanguard. Playing an assortment of instruments, Lovano is accompanied by veteran pianist James Weidman (Cassandra Wilson, Steve Coleman) and newcomers (at the time) Esperanza Spalding on upright bass and the tandem of Otis Brown III and Francisco Mela on drums and percussion.

The opening track, “Powerhouse” is a complex, bop piece that recalls the complexity of improvisational pioneers, John Coltrane and Charlie Parker. Lovano is able to push his tenor to unrestrained tones, yet maintain harmonic context. The title cut is modal jazz at its best. Switching to alto, he   establishes a sly groove before letting loose. An unconvential transition into a drum “dialogue” takes on characteristics of a suite. Weidman then executes a lyrical bop piano solo before Lovano swings on tenor. The thematic changes in style free the quintet to more open expression.

The ambition of this project extends to the instrumentation. Lovano introduces the taragato ( a Hungarian folk instrument, described as “half-clarinet and half-soprano saxophone”) on “Drum Song”. A stylized homage on “Dibango” (dedicated to the Cameroonian saxophonist-vibraphonist) includes an aulochrome (a double soprano saxophone with a single set of keys down the center). Also, the percussionists utilize ankle bells, ascending and descending opera gongs, Ethiopian drums, pander and dumbek for exotic accents throughout the album.

Lovano occupies a lofty position as a post-bop saxophonist. “Us Five” is reminiscent of the great jazz innovators of the late fifties and early sixties. Tenor runs vary from low-register rumbles to higher squawks with uncompromising originality. Weidman contributes an elegant solo (one of many) that invites comparisons to McCoy Tyner. His graceful chemistry with the group is on full display in “Wild Beauty”, with solos and counters with the sax. Another ballad, “Song For Judi” (dedicated to Lovano’s wife, singer Judi Silvano) offers a romantic interpretation with a rich tenor. “Ettenro” (Ornette spelled backward) captures the abstract spirit of its muse with dazzling sax play and spontaneous time and key changes. A bonus track (“Jazz Free”) is another extemporaneous concoction featuring inventive solos, especially by bassist Spalding.

There is never a dull or frivolous moment on Folk Art. The, tonal quality on this 180 gram vinyl is impeccable. From the power and complex sounds of the reed instruments to the intricacies of the percussion, the sound is clear and warm. To an incoming generation of jazz artists, Lovano (with his signature hat) is now the icon. 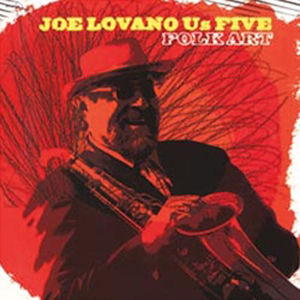