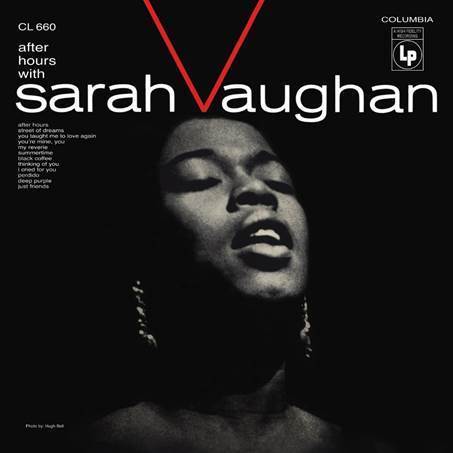 Derek Ansell, Jazz Journal Magazine Feb 2018 Sarah Vaughan: After Hours  4****  The early years of Sarah Vaughn here, flexing her amazing vocal cords and singing as only she could in her prime. Her first attempts at scatting show how easily and comfortably she mastered that mode of ression.
She tackles 12 standards on this release, which comes in the original Columbia style jacket. It appears to be six 78 issues put together for a 12"LP. The uncredited orchestra (or orchestras) play well in that Smokey, bules-tinged jazz manner of the mid-1950s with plenty of brass and reed contributions and on tracks like Deep Purple a full string section is added. Vintage Sarah in a high-quality vinyl dressing. 4/5

This 1955 release is, of course, mono. For those who think this is a good thing (count me in), the recording shows off just how good mono recording technology, and Columbia’s version of that technology, happened to be in the late 1940s. Vaughan’s vocal delivery is well captured and the (uncredited) band fills a wide space around her. Pure Pleasure’s reissue presumably stems from a European safety copy. A close comparison to an original “6-eye” label original pressings reflects a slight loss of texture, showing a slightly dryer acoustic and small loss of depth in the soundstage. Still, the tapes have held up remarkably, and you would be hard pressed to identify the vintage of this wonderful music by the sound quality. Sound 4/5 Vinylreviews

Sarah Vaughan signed for Columbia in 1949 & her chart successes continued with the charting of "Black Coffee" in the summer of 1949. During her tenure at Columbia through 1953, Vaughan was steered almost exclusively to commercial pop ballads, a number of which had chart success.

No matter what she's singing you can't help but notice her amazing control and range. She's able to float effortlessly from the lowest end of the scale to the highest without effort. Her singing is as much second nature as breathing is to most of us.

I don't know if you've ever heard the term phrasing applied to singing, it's not something you hear often anymore. To be honest it’s not something I'm sure I can define. The closest I can come to is it refers to a singer's ability to associate the lyrics of a song with the music. However, it means more than just being able to carry a tune. It's how you sing the words and music together. It's the ability to turn your voice into a lead instrument in a band and take one word and extend it over a whole series of notes. However it doesn't just mean the ability to sustain a note, it's continuing to sing the melody but with only one or a few words without them losing meaning or throwing the continuity of the song out of whack.

Listen to Vaughan wrap her voice around a word and you begin to understand what is meant by the term. You also realize why you don't hear the term used very often anymore as very few modern singers have this ability. To be fair the music of today doesn't really lend itself to that style of singing either. However hearing a singer of the quality of Vaughan you begin to regret its passing. I'm sure there are jazz singers around who have the ability, but we don't hear them on a regular basis.

Of course it's this ability which allowed her to be equally comfortable with any style of music she wished to sing. On this LP we hear her sail through a series of smoothly orchestrated pop tunes. Even the version of Gershwin's "Summertime" is given the uptempo treatment. This might have been a collection of rather commercial standards, but she gives them a soulfulness that raises them above the level of just another pop song. She might not be as emotionally raw as Billie Holliday, but that doesn't stop her from being able to imbue even the simplest of songs with the heart necessary to make them soar.

PALLAS
Audiophile Vinyl - Made in Germany  For over 60 years the family business in the third generation of the special personal service and quality "Made by Pallas" is known worldwide. Our custom PVC formulation produces consistently high pressing quality with the lowest surface noise in the industry. Our PVC complies with 2015 European environmental standards and does not contain toxic materials such as Lead, Cadmium or Toluene. Our vinyl is both audiophile and eco-grade!
Browse this category: JAZZ
Contact information
Sarah Vaughan - After Hours With Sarah Vaughan - 180g LP Mono - SCOTT NANGLE AUDIO
T&C's and Privacy Policy