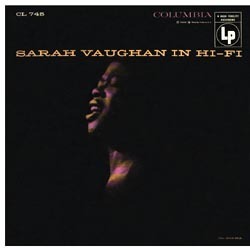 Most of Sarah Vaughan's Columbia recordings were on the commercial side, but not the memorable selections on this wonderful vinyl reissue. She recorded eight selections in 1950 with an octet that included trumpeter Miles Davis, trombonist Benny Green, the remarkably cool clarinetist Tony Scott and tenorman Budd Johnson.
This double LP adds alternate takes to seven of the numbers, none on the original single LP release. This version of "Ain't Misbehavin'" is a true classic (with memorable eight-bar solos by each of the four horns); "Mean to Me" and "Nice Work If You Can Get It" are gems, and the other performances are not far behind. In addition, Vaughan sings two versions of "The Nearness of You" in 1949; there is also a previously unknown recording of "It's All In the Mind," and three orchestra numbers from 1951 and 1953 wrap up the outstanding reissue. Sassy has rarely sounded better
Sarah Vaughan (March 27, 1924 – April 3, 1990) was considered the most vocally gifted singer in American jazz, of the 20th Century, followed by Billie Holiday and Ella Fitzgerald. With a vocal range of three octaves, she could sing virtually anything she intended to. A couple of nicknames she acquired were Sassy and The Divine One.
Studying the piano from an early age, she became an organist and choir soloist at the Mount Zion Baptist Church as a pre-teen. At the age of eighteen, a dare from friends resulted in her entering the famed Amateur Contest at Harlem’s Apollo Theater in 1942.
Her rendition of the jazz standard "Body and Soul" won her first prize. Billy Eckstine was in the audience that night. Six months later, she had joined Eckstine in Earl Hines’s big band, and sang alongside Dizzy Gillespie and Charlie Parker, as well as being the bands second pianist.
"Tenderly" and "It's Magic" became popular during the late 1940s, and she continued to build on her fanbase in the 1950s with songs like "Misty" and "Broken-Hearted Melody." She continued playing with some of the biggest names in the business, including Miles Davis and Jimmy Jones.
Vaughan continued recording jazz and pop material on a variety of labels in the 1950s, 60s, 70s and early 80s.
Only someone with Vaughan’s sweeping vocal talent could stand being pushed so far in front of the instrumental backing in the mix. She stands alone, easily filling the vast space she’s given, on a set of ultra-cool arrangements of mostly standards, holding long extended vibrato phrases, swooping and soaring, sometimes cat-like and always daringly as only Vaughan could. The open spaces allow Vaughan to produce timbral and phrasing acrobatics that mesmerize all these years later.
Hearing this set made obvious to me for the first time a direct connection between Vaughan and Rickie Lee Jones. Though Jones lacks Vaughan’s range, she does capture the mood.
A standout track is the “noir”-ish “Pinky,” a moody, wordless, Theramin-like otherworldly improv backed by a lush, string-drenched orchestration.
Mastered from the original mono analog master tapes (though clearly some if not all were transferred to tape from 78rpm lacquer or metal parts given the recording dates) the sound is remarkably free of crackles and noise, while not sounding filtered and rolled off either. The sonic vibe is evocative of a far simpler, slower time as an exhausted America awoke from a post WWII stupor. Who could have imagined what the 1950’s would bring? Certainly not the participants in these dreamy, velvet-like sessions.
Sarah Vaughan In Hi-Fi will definitely take you places you like.
Sarah Vaughan in Hi-Fi was recorded in May of 1950 for Columbia and produced by John Hammond.
Musicians:
Sarah Vaughan, vocals
Tony Scott, clarinet
Miles Davis, (tp)
Benny Green, (tb)
Budd Johnson, (ts)
Jimmy Jones, (p)
Freddie Green, (g)
Billy 'Pickles' Taylor, Jr. (b)
J.C. Heard, (d)
Selections:
LP 1
1. East of the Sun
2. Nice Work If You Can Get It
3. Pinky
4. The Nearness of You
5. Come Rain or Come Shine
6. Mean To Me
7. It Might As Well Be Spring
8. Can't Get Out of This Mood
9. Spring Will Be a Little Late This Year
10. Ooh, What-cha Doin' To Me
11. Goodnight My Love
12. Ain't Misbehavin'
LP 2
1. It's All In the Mind
2. The Nearness of You (alternate take)
3. Ain't Misbehavin (alternate take)
4. Goodnight My Love (alternate take)
5. Can't Get Out of This Mood (alternate take)
6. It Might As Well Be Spring (alternate take)
7. Mean To Me (alternate take)
8. Come Rain or Come Shine (alternate take)
9. East of the Sun (alternate take) 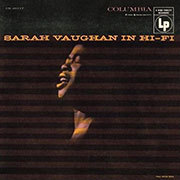