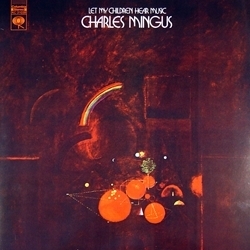 Charles Mingus called this late-period 1972 set “the best album I have ever made.” Even in the context of the giant's other masterpieces, it's hard to argue with that statement. Let My Children Hear Music is that kind of great.
A large-ensemble effort featuring enterprising arrangements, the record surrounds the bassist/composer with a tremendous orchestra and swirling, glorious structures  with volleying horns, elaborate solos, and introspective moodiness. The most valuable buried treasure in Mingus’ distinguished catalog? Hear the songs for yourself, and decide. Music, however, has made it much easier to arrive at an answer.
Why? The sound on this 180g LP pressing practically invites you into the studio.
Given proper room, dimensions, and imaging, the instruments and the music they combine to produce, further exposes Mingus' genius and reminds us all once again why sonic transparency equates to emotional realism and soulful revelation.What a record.
"On the original LP issued by Columbia, Mingus thanked producer Teo Macero for "his untiring efforts in producing the best album I have ever made." From his deathbed in Mexico in 1979 he sent a message to Sy Johnson (who was responsible for many of the arrangements on the album), saying that Let My Children Hear Music was the record he liked most from his career. Although Mingus' small-group recordings are the ones most often cited as his premier works, this album does, in fact, rank at the top of his oeuvre and compares favorably with the finest large-ensemble jazz recordings by anyone, including Ellington.
The pieces had been brewing over the years, one from as far back as 1939, and had been given more or less threadbare performances on occasion, but this was his first chance to record them with a sizable, well-rehearsed orchestra. Still, there were difficulties, both in the recording and afterward. The exact personnel is sketchy, largely due to contractual issues, several arrangers were imported to paste things together, making the true authorship of some passages questionable, and Macero (as he did with various Miles Davis projects) edited freely and sometimes noticeably. The listener will happily put aside all quibbles, however, when the music is heard. From the opening, irresistible swing of "The Shoes of the Fisherman's Wife Are Some Jiveass Slippers" to the swirling depths of "The I of Hurricane Sue," these songs are some of the most glorious, imaginative, and full of life ever recorded. Each piece has its own strengths, but special mention should be made of two. "Adagio Ma Non Troppo" is based entirely on a piano improvisation played by Mingus in 1964 and issued on Mingus Plays Piano.
Its logical structure, playful nature, and crystalline moments of beauty would be astounding in a polished composition; the fact that it was originally improvised is almost unbelievable. "Hobo Ho," a holy-roller powerhouse featuring the impassioned tenor of James Moody, reaches an incredible fever pitch, the backing horns volleying riff after riff at the soloists, the entire composition teetering right on the edge of total chaos. Let My Children Hear Music is a towering achievement and a must for any serious jazz fan. Included is the essay that accompanied the album. That essay, covering enormous territory, reads like an inspired Mingus bass solo and should be sought out by interested listeners.
One can't recommend this album highly enough." - Brian Olewnick
Musicians:
Charles Mingus, bass
Lonnie Hillyer, trumpet
Jimmy Nottingham, trumpet
Joe Wilder, trumpet
Snooky Young, trumpet
Jimmy Knepper, trombone
Julius Watkins, French horn
Charles McPherson, alto saxophone
Jerry Dodgion, reeds
Bobby Jones, tenor
Hal McKusick, reeds
James Moody, reeds
Jaki Byard, piano
John Foster, piano
Roland Hanna, piano
Charles McCracken, cello
Ron Carter, bass
Richard Davis, bass
Milt Hinton, bass
Dannie Richmond, drums
Teo Macero, alto saxophone, conductor
Charles Mingus Let My Children Hear Music
1. Shoes of the Fisherman's Wife Are Some Jive Ass Slippers
2. Adagio ma Non Troppo
3. Don't Be Afraid, the Clown's Afraid Too
4. Hobo Ho
5. Chill of Death
6. The I of Hurricane Sue