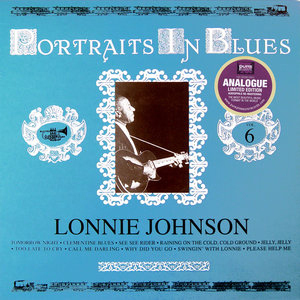 Pure Pleasure Records has done their usual superb remastering job with the original Storyville tapes. It would actually be news if Pure Pleasure had done anything less. Having the opportunity to hear Lonnie Johnson in superb sonics is a real treat as Johnson is a unique musician who could cross jazz and blues genres easily. This LP shows that the two musical idioms could be blended into a sweet mix when you have the talent of the inimitable Lonnie Johnson. Highly recommended! Sound 4.5/5 Audaud

Blues guitar simply would not have developed in the manner that it did if not for the prolific brilliance of Lonnie Johnson. He was there to help define the instrument's future within the genre and the genre's future itself at the very beginning, his melodic conception so far advanced from most of his pre-war peers as to inhabit a plane all his own. For more than 40 years, Johnson played blues, jazz, and ballads his way; he was a true blues originator whose influence hung heavy on a host of subsequent blues immortals.

Johnson's influence was massive, touching everyone from Robert Johnson, whose seminal approach bore strong resemblance to that of his older namesake, to Elvis Presley and Jerry Lee Lewis, who each paid heartfelt tribute with versions of "Tomorrow Night" while at Sun.

If you like Muddy Waters, you'll immediately take to the music of Lonnie Johnson. One will be in pretty good stead too as the work of Lonnie Johnson didn't escape the notice of Robert Johnson, Elvis Presley or Jerry Lee Lewis. Or as Keith Shadwick expressed it in Blues: Keeping the Faith, Lonnie Johnson was the "instrumental link between blues and early forms of jazz." Johnson's "gift was the area of melodic and thematic improvisation." Like many of his peers such as Lightnin' Hopkins, Johnson's career was experiencing a resurrection in the early ‘60s. Storyville Records Portraits in Blues, recorded seven years before Johnson's death at age 81, finds Johnson paired with the renowned Otis Spann on piano.

Storyville Records, founded in 1954 by jazz aficionado Karl Emil Knudsen, isn't exactly a household record label name. As explained on the Storyville website, "the burgeoning post-war jazz scene attracted the American jazz artists to tour in Europe and Scandinavia and Knudsen seized every opportunity to record his jazz heroes for the label."

Employing the typical vocal processing of the day, this album varies in sound quality between tracks. Instruments are less processed and therefore sound far better than vocals. Sean Magees' re-mastering brought out a tremendous sense of detail on Johnson's guitar and Spann's piano as on "See See Rider."

Lonnie Johnson has been described as the grand old man of the blues. Born in 1894, in New Orleans, Johnson had a long and varied career; both playing and being rediscovered many times when he took time off from playing to do menial labor work to cover the lean times.

Johnson’s playing and singing is unique as it crosses boundaries between jazz and the blues. His blues had a more jazz orientation as his guitar picking leaned toward acoustic jazz and his voice had a sweetness unlike the more country blues gruffness found from Southern blues men. There is a sophistication he brought to blues like Clementine Blues, See See Rider, and Jelly Jelly.

Johnson also mastered the violin, which may be a reason that he made a name for himself in jazz circles, playing with Louis Armstrong’s Hot Seven as well as a brief stay with early Duke Ellington. Lonnie cut an extended series of recordings for Okeh Records in the mid 20s to early 30s. His recordings with jazz guitarist, Eddie Lang, are legendary.

On Portraits of Blues, we find Lonnie near the end of his career (he passed away seven years after this recording) on tour with the great Otis Spann accompanying him on piano. Johnson’s voice was still strong at age 64 and his guitar playing was still robust.

Pure Pleasure Records has done their usual superb remastering job with the original Storyville tapes. It would actually be news if Pure Pleasure had done anything less. Having the opportunity to hear Lonnie Johnson in superb sonics is a real treat as Johnson is a unique musician who could cross jazz and blues genres easily. This LP shows that the two musical idioms could be blended into a sweet mix when you have the talent of the inimitable Lonnie Johnson. Highly recommended! Sound 4.5/5 Audaud 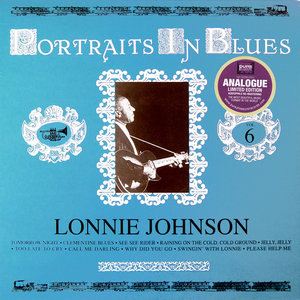