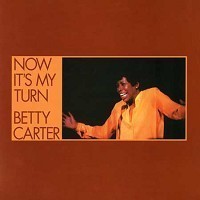 Arguably the most adventurous female jazz singer of all time, Betty Carter was an idiosyncratic stylist and a restless improviser who pushed the limits of melody and harmony as much as any bebop horn player. The husky-voiced Carter was capable of radical, off-the-cuff re-workings of whatever she sang, abruptly changing tempos and dynamics, or rearranging the lyrics into distinctive, off-the-beat rhythmic patterns.

She could solo for 20 minutes, scat at lightning speed, or drive home an emotion with wordless, bluesy moans and sighs. She wasn't quite avant-garde, but she was definitely "out." Yet as much as Carter was fascinated by pure, abstract sound, she was also a sensitive lyric interpreter when she chose, a tender and sensual ballad singer sometimes given to suggestive asides. Her wild unpredictability kept her marginalized for much of her career, and she never achieved the renown of peers like Ella Fitzgerald, Sarah Vaughan, or Carmen McRae.

What was more, her exacting musical standards and assertive independence limited her recorded output somewhat. But Carter stuck around long enough to receive her proper due; her unwillingness to compromise eventually earned her the respect of the wider jazz audience, and many critics regarded her as perhaps the purest jazz singer active in the '80s and '90s.

The eclectic rest of the set consists of equally lesser known standards of an era long gone now and pretty much gone back then.
The recording does an excellent job of capturing Carter’s voice warmly and intimately, with minimal, if any, processing. The same can be said of the other instruments, though the drum kit is splayed all across the soundstage, which can be somewhat distracting at times.
Fortunately the drums are cleanly and tastefully recorded as is the piano and the bass, most likely in a fairly small studio with each instrument well-isolated from the others in a style that allow major control and minimal microphone leakage so there’s not a great sense of a group playing in a space but there is excellent vocal and instrumental clarity.The tonal balance is very warm and intimate as if you're sitting very close to the stage in a cozy jazz club. For Betty Carter fans or for musically adventurous jazz lovers, this Pure Pleasure reissue of a relatively obscure album will be a real treat. And yes, Betty most certainly still had it!  - Music 8/10 Sound 8/10 Michael Fremmer
Betty Carter
John Hicks
Walter Booker ),
Music Maestro, Please / Swing Brother Swing
I Was Telling Him About You
Wagon Wheels
New Blues (You Purr)
Most Gentlemen Don't Like Love
Making Dreams Come True
Open the Door
Just Friends / Star Eyes
No More Words
Browse this category: JAZZ
Contact information
Betty Carter - Now It`s My Turn - 180g LP - SCOTT NANGLE AUDIO
T&C's and Privacy Policy