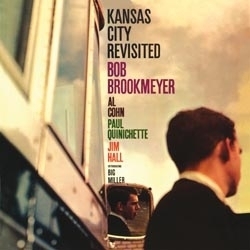 Back in the 1930s Kansas City was a major jazz scene as it was home to Bennie Moten’s Band followed by the Count Basie Jazz Orchestra. Bob Brookmeyer, the virtuouso valve trombonist, who just passed away in the last several months, gathered in 1958 a largely Basie-oriented septet to do honor to the KC scene by recording several standards of the day including “Jumping at the Woodside,” “Blue and Sentimental,” “Moten Swing,” and Travlin’ Light.” In addition Big Miller, who was a featured vocalist with the Fletcher Henderson band, was brought in on vocals to sing on “Travlin Light” and “A Blues.”

The British audiophile LP label, PurePleasure, has re-released Kansas City Revisited. Long out of print, the label used Ron McMaster to handle the remastering, and chose Capitol Studios’ facilities to rework this swinging 1958 issue. For a 50+ year old recording, McMaster has done a fine job polishing up the acoustics. Jim Hall’s guitar solo sounds mighty nice on the opening Basie standard, “Jumping at the Woodside,” with sympathetic backing by the rhythm section of Addison Farmer on bass, and Nat Pierce on piano, though Pierce’s piano is a bit distant in the sound mix.

Big Miller (true name, Clarence), born in 1922 in Iowa, had a reputation as a blues shouter, and I found his voice highly reminiscent of Joe Williams, the baritone singer who helped invigorate the Basie band in the 1950s. Miller wrote “A Blues,” and he provides a impetus for the band to blow on this track, especially Brookmeyer’s gut-bucket solo followed by the Vice Pres, Paul Quinichette, and the inimitable Al Cohn. What a front line!

“Blue and Sentimental” closes out Side 1 with a slow ballad that lopes along with the saxes  and Bob’s valve trombone sharing smoky choruses before Pierce shows his mastery of swing blues. The horns then take the tune out.

“Doggin’ Around” has Pierce matching Basie for economical introductory piano lines, setting the stage for Brookmeyer and Company to gradually up the ante and each shows their Kansas City credentials for dance hall and tavern excitement. Among the most famous of all the Basie book is “Moten Swing,” written by Basie’s mentor, Bennie Moten. Its relaxed swing set in motion by Addison Farmer and Nat Pierce, sets up the refrain from the horns that is instantly recognizable. Basie’s big band, of course, took it out brass heavy, while this septet led by Jim Hall’s guitar and the sax duo and trombone front line, massage the tune small group wise. Each horn gets its chance to shine and it’s tough to award honors with the talent pool here.

KC Revisited ends with another vocal by Big Miller on “Travlin Light.” Miller signifies how he needs little luggage since his baby left. Paul, Al, and Bob help him out proving its the quality of the man not his “baggage”. After all its just a matter of time till his love comes back…

For some old school light blues and swing, you can’t beat revisiting the early home of jazz before the boppers moved the scene farther East. 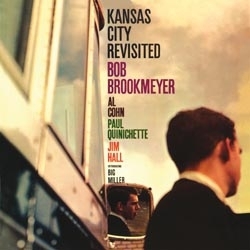