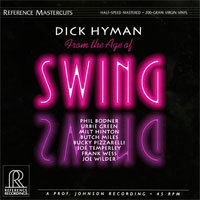 Half-speed Mastering involves a capturing process in which the original recording master is played back at exactly half of the recorded speed. A sequenced cutting lathe is then timed at exactly half of the playback speed. This process allows twice as much time to carve a groove that accurately represents the sound on the master tape. Half-speed mastering allows

Disc mastering is done at half-speed to insure maximum accuracy. The lathe system has custom electronics by Nelson Pass. The simple signal path contains no compression, equalization or unnecessary circuitry. RR Chief Engineer and Technical Director, "Prof." Keith Johnson consulted on the design of the system and helped with the rebuilding of the lathe and electronics, which is owned and operated by long-time mastering expert Paul Stubblebine. "Prof." Johnson has pronounced it equal to the challenge of our master tapes!

Once successful results were achieved in disc mastering, Reference Recordings faced the difficult task of choosing the best plating and pressing facility to manufacture the discs. Fortunately, the new Quality Record Pressings plant in Salina, Kansas was coming on line, and they felt that waiting for this plant to open was well worth it. A crack team of experts was assembled to design and run the plant, employing many unique techniques and features that clearly set QRP apart from all other pressing plants. The 200-gram deluxe vinyl pressings from QRP are truly exceptional.

Multiple Configurations for Reference Mastercuts
Depending on program lengths, some releases are cut at 45 rpm, some at 33-1/3 rpm. Some are single discs, some double. All feature deluxe gate-fold jackets crafted by Stoughton Printing . An unusual feature of new RR masterings is called the "FDS finish": the end of each side will have a 30-second band of silent grooves before the "pull-away." No one today uses a record changer, and the silent grooves allow time to lift the arm before the always-somewhat-noisy tie-off. (Some 1950s vintage Capitol Full Dimensional Sound pressings sported this feature.) RR founder, J. Tamblyn (Tam) Henderson deserves special recognition for identifying the value of this unique production feature and reintroducing it with the new Mastercuts.

Note: Half-speed Mastering involves a capturing process in which the original recording master is played back at exactly half of the recorded speed. A sequenced cutting lathe is then timed at exactly half of the playback speed. This process allows twice as much time to carve a groove that accurately represents the sound on the master tape. Half-speed mastering allows for cleaner reproduction and also permits extended high frequency response, extending into the ultrasonic region.

A longtime student of jazz piano history, Dick Hyman has previously recorded the works of Eubie Blake, Jelly Roll Morton, James P. Johnson, Fats Waller, Duke Ellington and other early jazz pianists. His interests extend to other areas as well, and in a varied career he continues to be a composer, conductor, arranger and organist. He has provided scores for numerous film and television programs and has performed or arranged for countless recording sessions both under his own name and in support of other artists. Mr. Hyman has composed film scores for Moonstruck and various Woody Allen vehicles, as well as original scores for leading dance companies.

Some of the greatest jazzmen who lived and played through the Swing Era have been brought together once again, perhaps for the last time. Dick Hyman arranged groups of four, five and seven, and Prof. Keith Johnson recorded them in a concert hall with great acoustics. Everyone loved the chance to play together just like the good old days, to listen and balance naturally. There were no "booths" nor earphones anywhere.

"Musically and conceptually, the album reminded me of the excellent Chesky SACD from Bucky Piazzarelli: Swing Live, though From the Age of Swing has an aggregation of performers almost double the size. Sonics are, of course, fabulous, and getting up frequently to change sides didn’t seem as annoying as with classical material at 45 rpm. Part of this was due to Reference Recordings putting a bit more time on each side than the only seven or eight minutes on most audiophile 45 rpm 12-inchers." - John Henry, 5 Stars!!, www.audaud.com

Dick Hyman From The Age Of Swing