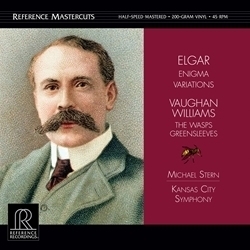 Do not, I mean this absolutely, let this one pass you by. It is a treat at all levels, and just you wait till you hear the string section’s technical finesse and execution throughout." — Harry Pearson, HPSoundings
A new symphonic tour-de-force from Michael Stern and the Kansas City Symphony! This colorful, beloved English music composed by Edward Elgar and Vaughan Williams has been captured by Grammy-winning engineer Keith O. Johnson and produced by Grammy-winner David Frost.

"In its openhearted commitment to letting Elgar's orchestration serve as the interpretative guide, and so moving mostly at a leasirely pace where everything that's going can be properly heard, this performance could also serve as any person's guide to the instruments of the orchestra...It's one of those satisfying instances where the recording engineer has caught perfectly the sound and sense of being there...with the sheer presence and weight that real sound possesses." - Laurence Vittes, Gramophone

"This new recording engineered by Keith Johnson is typical of the Professor's natural sound, accorded transparency and depth. He records the Kansas City Symphony beautifully - Elgar's very particular orchestration and dynamic markings have not been captured better on record. The Wasps, especially the fantastic overture, is underrated Vaughan Williams." - Anthony Kershaw, Audiophilia.com

The Kansas City Symphony garnered tremendous critical acclaim for their first project on Reference Recordings, incidental music for The Tempest by Sullivan and Sibelius. Their second release on RR, Britten's Orchestra, received a Grammy for Best Surround Sound for both the engineer and producer, as well as rave reviews everywhere!

RR was thrilled to work again with conductor Michael Stern, the son of famed violinist Isaac Stern. Now in his eighth season as music director, the Kansas City Symphony has been much praised for its remarkable artistic growth and development since his tenure began. He is also the founder of the Iris Chamber Orchestra in Memphis, Tennessee, and in addition to RR, has recorded for Sony, Hyperion, Denon, Arabesque and Naxos.
Producer David Frost has won Grammy awards in 2005, 2009 and 2011 for Classical Producer of the Year. He has produced a large roster of stars and Grammy-winning titles. RR was most honored to work with him again on this project.
Half-speed mastering involves a capturing process in which the original recording master is played back at exactly half of the recorded speed. A sequenced cutting lathe is then timed at exactly half of the playback speed. This process allows twice as much time to carve a groove that accurately represents the sound on the master tape. Half-speed mastering allows for cleaner reproduction and also permits extended high frequency response, extending into the ultrasonic region.

Elgar had a penchant for making mysterious remarks just to see what responses people would make. He also enjoyed creating secret elements to some of his compositions, and never revealed during his life just what the overlying theme of his Enigma Variations (in other words, the enigma) really was. Its 14 variations were originally identified only by initials or a nickname that stood for the friend of Elgar’s who was portrayed in the particular variation. Reference got a San Francisco artist to do a little drawing of each of the 14 variations and what or who they referred to. The work’s concluding “Finale” brings the variations to a tumultuous close, and since Reference stays away from the center label a good distance and there is only around 14 minutes maximum per side, fidelity is astounding.

Reference devotes a paragraph in their publicity to the half-speed mastering using in the production of this vinyl double album. That was a process much favored back in the ‘70s in audiophile vinyl and I don’t know if it is always used now in mastering vinyl. It plays back the original recording master at exactly half the normal speed and a sequenced cutting lathe is then timed to cut the master at exactly half the playback speed. This allows for cleaner reproduction and extended high end response.

Nevertheless, this 200-gram Mastercut album is sure to impress listeners even if they own a less than super-high-end turntable system. 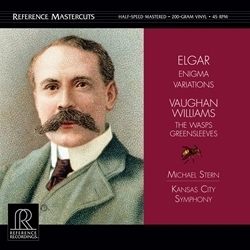