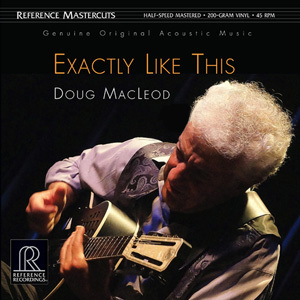 Mastered by Paul Stubblebine - Half Speed Mastering -  Pressed at QRP

I can`t give this album 12 for recording quality, but that`s what it warrants , it makes your system sound as though it costs at least twice the price you paid Jason Kennedy Hi-Fi + Recording 10/10 Music 8/10

"Exactly Like This" is already the third album, the blues guitarist Doug MacLeod published with the label Recordings Recordings. The collaboration with "Prof" Keith Johnson is successful: in 2014, MacLeod was honored for "There's A Time" twice with a major blues award in the USA. "Exactly Like This" contains eleven new, self-composed songs that take on his diverse musical influences and honor the likes of Louis Jordan, Wes Montgomery, and John Lee Hooker.

That each of his songs "goes exactly the same", Doug MacLeod assures his audience at his concerts time and time again. He plays only for the audience of the evening, does not just repeat a previous performance. Also his albums, Each of the songs recorded with fresh wit.

The LP version now appears as a double 45rpm version in the folding cover and gives the dynamics of the guitar playing excellent space. Paul Stubblebine was a half-speed mastering.

Doug MacLeod is a unique, powerful guitarist with a rich and soulful voice, singing original songs based on his own life and experiences.
His new album EXACTLY LIKE THIS is his third release with Reference Recordings. This is 'Genuine Original Acoustic Music' at its very best, in a richly detailed recording by Grammy-winning engineer Keith Johnson, made at Skywalker Sound in Marin County, CA.
NEW REVIEWS "...he is the most captivating of musical entertainers with a seemingly endless river of rabbits he can pull out of any number of hats. Killer stuff that just doesn't quit and recorded with a sound like he's playing right in front of you, just for you. Check it out." —Chris Spector - Midwest Record
“Comfort food for your soul.” Dr. Bob - KPOV, Bend, OR
In live performance, Doug MacLeod assures his audience "This song is going to go exactly like this." It's presented just for them, not a repeat of any performance he's ever given or will ever give. He records the same way, each of his original songs are offered with a fresh voice. EXACTLY LIKE THIS contains eleven new MacLeod originals reflecting and paying tribute to some of his diverse musical influences: Louis Jordan, Wes Montgomery, Jerry Reed, Tony Joe White, John Lee Hooker, and even a little Duke Ellington. In his previous 19 studio albums, several live records, compilations, a blues guitar instructional DVD and a live performance DVD, MacLeod has consistently earned raves. His songs have been covered by many artists including Albert King, Albert Collins, Joe Louis Walker and Eva Cassidy. He has co-written songs with Dave Alvin and Coco Montoya. MacLeod's songs have been featured in many TV movies and the hit show In the Heat of the Night. Two of his songs are on Grammy nominated albums by Albert King and Albert Collins.
Doug MacLeod isn't just a blues guy, he's a singer/songwriter/storyteller and serious guitarist. He is one of the few modern artists doing all original material and traveling the country like a troubadour. Just Doug, headed down the road in his Honda, baseball on the radio, Siri by his side and a trunk full of music!
• 2014 Blues Music Awards Best Acoustic Artist (again nominated for 2015) and Best Acoustic Album.
Bestowed by The Blues Foundation in Memphis, TN, the world's most prestigious roots music awards.
• Blues Blast Magazine's 2013 Male Blues Artist of the Year
Bass – Denny Croy
Drums – Jimi Bott
Engineer – Keith O. Johnson
Executive Producer – Janice Mancuso, Marcia Martin
Guitar – Doug MacLeod
Recorded By – Sean Royce Martin
Vocals – Doug MacLeod 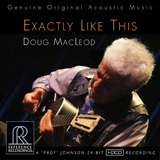