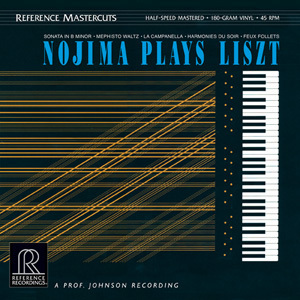 One of Reference Recordings’ most beloved LPs, Nojima Plays Liszt was recorded in December, 1986. It’s been a perennial of this magazine’s Super LP List, and now RR has reissued the title as a half-speed mastered 45rpm two-LP set with original liner notes by TAS Senior Writer Robert E. Greene. These, of course, are virtuoso showpieces for the piano, brimming with Liszt’s whizzing arpeggios, technicolor tone paintings, and dynamic extremes. Minoru Nojima plays them with a rare touch that combines a mind-bendingly effortless technique with a poet’s voice. (The reissue also contains Ravel’s Alborada del gracioso from the follow-up, Nojima Plays Ravel.) As recorded by Keith Johnson, the sound is fabulous, spectacular, bold, and perfect for this music. From the leaping opening of Mephisto Waltz #1, the exceptional clarity and percussive nature of Nojima’s Hamburg Steinway burst from one’s speakers with a veritable peacock’s tail of shimmering color and “hey, check this out!” sass. During slower passages the beauty of Nojima’s romantic nature is allowed to shine, as the wide dynamics and remarkable layered overtones in the air between the notes makes for a riveting experience ’til the very end. - TAS

A great gem from the Reference Recordings catalog, now released for the first time as a 45 rpm 2LP set, half-speed mastered. Nojima Plays Liszt on virgin vinyl from Quality Record Pressings, and packaged in a beautiful old-style gatefold jacket.

Nojima Plays Liszt  was named “Best Recording of the Month” by Stereo Review when it was originally released in 1988. It was described as “A stunning demonstration of technique put at the service of profoundly musical ends.”

Connoisseurs of great piano playing will love these performances. A reclusive cult figure who records even less often than he plays in public, Nojima is Japan's most celebrated concert pianist and a Cliburn Competition Silver Medal winner. The album includes his highly acclaimed performance of the Sonata in b minor.

From the LP Liner Notes: "Anticipating the judgment of history is no doubt presumptuous, but to hear Minoru Nojima is to find irresistible the idea that here is a pianist destined to join the pantheon of keyboard immortals. Nojima has a technique that invites comparison with the most dazzling of the great piano virtuosi, past or present. Even more, he has a depth of musical expressiveness that one can relate only to the spiritual, to music as an almost religious experience. His playing, once heard, is literally unforgettable..." —Robert Everist Greene Professor of Mathematics, UCLA Reviewer, The Absolute Sound

This new album includes all the music from the original Nojima Plays Liszt, plus one track from Nojima Plays Ravel.