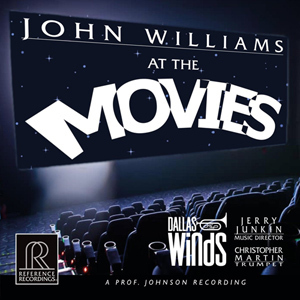 the band pulls out all the stops with performances throughout the four sides that would blow a door off its hinges. Besides the startling dynamic range, open-window transparency and spacious soundstaging, this cut (and others) contains some of the most carpet-curling bass-drum whacks I’ve ever heard. Prepare yourself for this one hat also spoils us here are the astonishing dynamics, impact and vividness of this stirring recording. Even if you know these movies well, you've not heard the music from them sound like this. Sound 5/5 TheAudioBeat

The sound is everything you want in an eye-popping audiophile recording, while maintaining artistic integrity. The pyrotechnics are especially evident on the Lucas film-based music, where the percussion has you wishing you had opted for one size larger in speakers. Dynamics swing from dead quite black backgrounds to huge crescendos of percussion and trumpets in the 'Imperial March' appropriate for the theme song of one of the twentieth century's darkets villians. This is the ideal record set to pull out to get your audiophile friends' juices flowing - just skip the wine and cheese and fill up the popcorn bowl, and don't skimp on the volume level.- -Dennis Davis, Hi-Fi+, Recording 10/10, Music 10/10

John Williams is a game changer. Early in his career he crossed the lines between music that was "art" and music that was "commercial," and never looked back. He is one of the best known, most awarded and most successful composers in US history, and his name is inextricably connected to outstanding music for films. He has written scores for over 100 films, and his massive list of awards includes 51 Academy Award nominations and five wins, as well as 24 Grammy® awards. A less-known fact is his fondness for writing, arranging and conducting wind band music. This collection of his film music includes favorites from Star Wars, Superman, JFK, ET and many more, arranged for concert performance by top-level wind ensemble.

Brilliant performances by The Dallas Winds were recorded in spectacular audiophile sound by Reference Recordings' own award- winning engineering team: Keith O. Johnson and Sean Royce Martin. The engineers and album received GRAMMY® nominations in 2018 for Best Engineered Album, Classical and Best Classical Compendium for the 61st GRAMMY® Awards. John Williams: At The Movies features soloist Christopher Martin, principal trumpet of the New York Philharmonic. The recording was made in Dallas Texas, in the Morton H. Meyerson Concert Center, one of the world's greatest concert halls, and the site of an annual Dallas Winds concert featuring the film music of John Williams.

Side 1:
Olympic Fanfare And Theme
Superman March
The Cowboys Overture
Side 2:
Adventures On Earth from E.T.: The Extra-Terrestrial
With Malice Toward None from Lincoln
March from 1941
Side 3:
Scherzo For X Wings from Star Wars: The Force Awakens
The Jedi Steps And Finale from Star Wars: The Force Awakens
Star Wars (Main Title)
Side 4:
Imperial March from The Empire Strikes Back
Excerpts from Close Encounters Of The Third Kind
Theme from J.F.K.
The Star-Spangled Banner