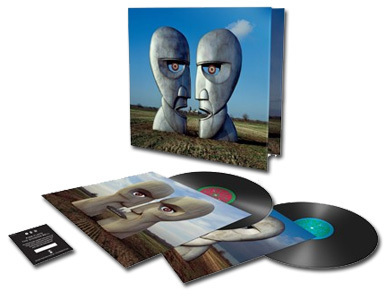 Remastered by Doug Sax at The Mastering Lab from the original analog tapes!

"The pressing quality across the two LPs are uniformly excellent... The playback backgrounds are black (near dead silent) with no issues to murk up the signal-to-noise ratio. ... The sonic results are everything you would want and more — the presentation of voices and acoustic instruments like piano, sax, percussion and acoustic guitars are viscerally stunning in their clarity. ... After just one spin I knew The Division Bell was among the best sounding vinyl records in my collection." — Paul Powell Jr., http://www.brain-damage.c

The second post-Roger Waters Pink Floyd album is less forced and more of a group effort than A Momentary Lapse of Reason -- keyboard player Rick Wright is back to full bandmember status and has co-writing credits on five of the 11 songs, even getting lead vocals on "Wearing the Inside Out." Some of David Gilmour's lyrics (co-written by Polly Samson and Nick Laird-Clowes of the Dream Academy) might be directed at Waters, notably "Lost for Words" and "A Great Day for Freedom," with its references to "the wall" coming down, although the more specific subject is the Berlin Wall and the fall of Communism. In any case, there is a vindictive, accusatory tone to songs such as "What Do You Want From Me" and "Poles Apart," and the overarching theme, from the album title to the graphics to the "I-you" pronouns in most of the lyrics, has to do with dichotomies and distinctions, with "I" always having the upper hand. Musically, Gilmour, Nick Mason, and Wright have largely turned the clock back to the pre-Dark Side of the Moon Floyd, with slow tempos, sustained keyboard chords, and guitar solos with a lot of echo.
Side 1
Cluster One
What Do You Want From Me
Poles Apart
Side 2
Marooned
A Great Day For Freedom
Wearing The Inside Out
Side 3
Take It Back
Coming Back To Life
Keep Talking
Side 4
Lost For Words
High Hopes 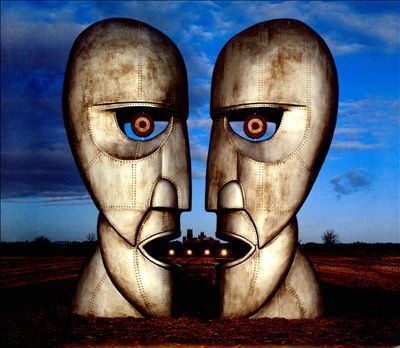