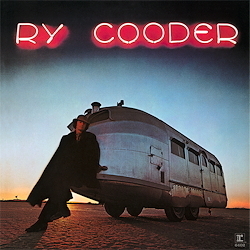 The best news about this reissue is how much better it sounds compared to the Tidal MQA and Qobuz  streams I auditioned. Kevin Gray’s remastering and the dead-quiet Pallas pressing convey more of the chest and throat of Cooder’s vocals, whereas the digital streams render his voice even reedier than it already is. Fortunately, this all-analog Speakers Corner release takes the digital edge off Cooder’s steely slide-guitar licks. Drums on the remaster also have additional weight, but the real payoff comes on Cooder’s original compositions. The richness and depth of his acoustic-guitar tones can be better appreciated, as individual notes hang in the air, resonating throughout the room much like they would during a live performance. The sense of presence on these cuts is off the charts. While I didn’t have access to an original LP to compare, the Speakers Corner version is a good bet for fans who want a clean and ruler-flat pressing of this fine Americana recording - The audio beat

By the time he was aged 22, Ry Cooder was already a veteran of the music business and in great demand as a studio musician and sideman. Shortly after signing a contract with Warner Music in 1969, he released his first album under his own name, placing his confidence in the musical talent he had developed since being a child and on the rare value of his favourite instrument, the steel guitar.
The present LP that carries his name is a fascinating blend of blues, folk, rock ’n’ roll and pop – a unique mixture, which combines superb songs, virtuosic playing and somewhat bizarre yet imaginative arrangements. For material, Cooder, the son of folklorist parents, dug out ten gems coming from over six decades, right back to the 1920s – by legends such as Woody Guthrie, Blind Blake, Sleepy John Estes and Leadbelly, as well as a more up-to-date Randy Newman composition. As magnificent as his choice might be, it is the exuberant charm of his own instrumental composition "Available Space" that almost steals the show here. Expansive and unbiased, Cooder plays an ironic game made up of wordless irregular phrases, which promise the listener something new and ultimately circle in an infinite loop.
Cooder’s need to prove himself, moderated by his veneration for the past, helps to create a completely original work that will prove rewarding for the adventurous listener.

This Speakers Corner LP was remastered using pure analogue components only, from the master tapes through to the cutting head.  All royalties and mechanical rights have been paid.