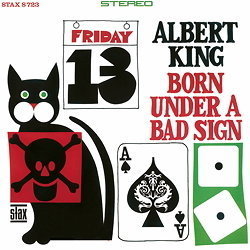 Speakers Corner’s uncompromising commitment to the complete preservation of the analog recording chain captures the mood of Born Under a Bad Sign unlike any other version I’ve heard. The company’s decision to use the Pallas pressing plant yields grave-yard-quiet, jet-black backgrounds. The results of this attention to every detail are musical dynamics and holography that make the album sound like the musicians are performing right in the room. If you like your blues to sound live and real, I can’t recommend an LP more highly than this one - The Audio Beat

With consistent attention to detail the vinyl re-mastering by Speakers Corner is top-notch. King’s soulful voice is captured with warmth. The various instruments are mixed evenly and are never obtrusive. The horns are understated, and the crisp tonality of King’s Gibson is prominent. Born Under a Bad Sign is worthy of an analog upgrade…and this one is stellar!   Sound 4.5/5 AudiophileAudition

"King's first album for the Stax label combines his hard, unflashy guitar playing with the sleek sound of the label's house band, Booker T. and the MGs. Hits such as "Crosscut Saw" and "Laundromat Blues" influenced rockers from Clapton to the Stones and earned King a new rock & roll audience." - www.rollingstone,com
It took more than four decades of patient hard work until a discriminating congregation could proclaim Albert King as one of the three kings of the electric blues, alongside B. B. King and Freddie King. Albert had a tough but highly motivated beginning, playing blues on a guitar he had made himself. Later he bought a really good instrument, then came a couple of promising songs, and a series of successful singles made under a contract with Stax Records in Memphis. Finally, late in life, Albert landed on the sunny side with "Born Under A Bad Sign." The album became one of the most influential recordings in the history of the blues. King's music was appreciated by white people too, which smoothed his path out of small clubs and on to big live events.
Right from the title song, he travels along familiar tracks in the blues world, occasionally making a detour to hectic, soulful realms ("Crosscut Saw") and letting himself be carried away by strident winds ("Kansas City"). Over and over again, the musicians surprise one with ever new sound colourings, as in the hum and buzz of "Oh, Pretty Woman," the brusque admonitory "Down Don't Bother Me," or the swinging fiddling of "The Hunter."
This Speakers Corner LP was remastered using pure analogue components only, from the master tapes through to the cutting head. All royalties and mechanical rights have been paid.
Recording: March 1966 - June 1967 at Stax Studios, Memphis (TN)
Production: Jim Stewart
1. Born Under A Bad Sign
2. Crosscut Saw
3. Kansas City
4. Oh, Pretty Woman
5. Down Don’t Bother Me
6. The Hunter
7. Funk-shun
8. I Almost Lost My Mind
9. Personal Manager
10. Laundromat Blues
11. As The Years Go Passing By
12. The Very Thought Of You
13. Overall Junction 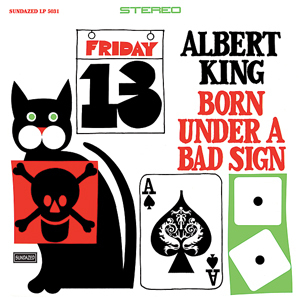