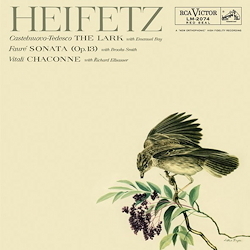 Violinist Jascha Heifetz is joined here by organist Richard Elsasser, and pianists Emanuel Bay and Brooks Smith for this recording of compositional works by Vitali, Castelnuovo-Tedesco, and Faure.

"Vitali’s Chaconne is almost as old as the violin itself. Originally written for violin and figured bass, it was rescued from oblivion by this German violinist, Ferdinand David, who edited it for violin and piano and published it in 1867; few violinists since that time have omitted it from their repertory. But we must confess to never having heard Respighi’s transcription of it for violin and organ. It is magnificent! Victor's jacket notes states that this transcription “… explores the technical possibilities of the violin beyond the limits known in Vitali’s time." But in the hands of Heifetz, this display piece becomes a thing of great beauty, and the depth of the resplendent organ accompaniment makes the work almost symphonic. Castelnuovo-Tedesco's The Lark is a first recording; although it is a pleasant enough work, it may well be the last recording of it. Many violinists have essayed Faure's Sonata No. 1 on LP discs, and Heifetz’ is as good as any, better than most." —The New Records 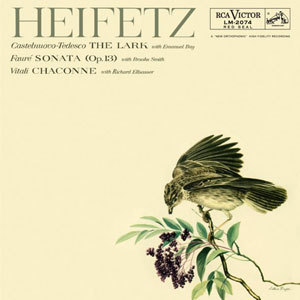