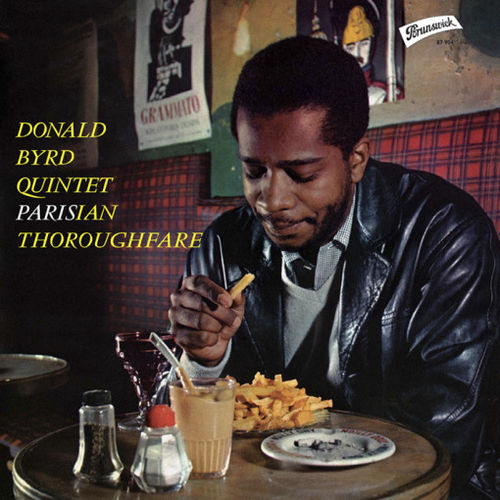 This spirited, bop-oriented music is the equal of the first volume.

In its October ‘58 issue, the title carried by Jazz Hot magazine was: Revelation at the Chat Qui Pêche. The spirit of jazz (which some thought was dying) is sparkling with life in the Donald Byrd Quintet. And indeed, on its first appearance at the Cannes Festival in July (the Jazz Festival, not the other one), the Donald Byrd Quintet brought the house down. Its members were hardly the Who’s Who of jazz, however.
People vaguely knew that the leader had replaced Kenny Dorham in the Jazz Messengers, that Doug Watkins had played bass with them, and that pianist Walter Davis Jr. had been with Charlie Parker before he was 19. As for Art Taylor, if he’d already enjoyed a career longer than that of his colleagues, it hadn’t yet brought him recognition beyond a small circle of cognoscenti. Only Bobby Jaspar – who’d shone at the Club St. Germain – was famous with the Parisian audience.
At the beginning of 1956, he’d decided to try his luck in the United States; J.J. Johnson had hired him, and then Miles Davis (for a brief spell) before Donald Byrd brought him into his own group. After appearing in Cannes (in the sun) and Knokke-le-Zoute (a much smaller audience) for almost three months, the Donald Byrd Quintet settled down for the autumn in one of the capital’s top jazz spots, the Chat Qui Pêche on the Rue de la Huchette. In that tiny room, wrote Frank Ténot, »where the owner used to bump into the soloists by accident when she was serving her customers, the music they played was hot, and always surprising
To crown a tour that had been extremely satisfying for everyone, a concert at the Olympia theatre was organised (there were gigs there called “Jazz Wednesdays”). Byrd and Co. took things very seriously, even though they preserved the relaxed approach that their (relatively) long association now permitted: "La Marseillaise", and "And The Angels Sing" are both present in the introduction to Parisian Thoroughfare played by the two horns. The latter then went on to imitate other horns, those of the cars on 52nd Street ... However, when it came to "Stardust", it was with all the seriousness in the world, almost in meditation in fact, that Donald Byrd improvised over the backing provided by just Walter Davis Jr. and Doug Watkins. Bobby Jaspar, of course, was marvellous.
If he showed a marked obedience to Sonny Rollins, he still preserved, intact, the virtues of sobriety that prevented him falling into the trap of serving up torrents of notes in pieces taken at a rapid tempo ("At This Time", for example). During the exchanges on "Formidable", you’d be forgiven for saying that he gets the better of Donald Byrd. As for the complicity that reigned between the members of the rhythm section, it gave the formation a homogenous character that was very rare in a quintet. One can’t thank François Postif enough for taking the risk to release this concert at the time. Now, almost half a century later, one can only agree with Jazz Magazine’s critic on the subject of the Donald Byrd Quintet: »The only thing missing (…) was the consecration that a great concert in Paris would bring. They won that last battle with astounding brio in front of an audience of connoisseurs. There were many there who thought modern jazz had never been so well-served in Paris.
Recording: October 1958 in Olympia Hall, Paris
"Parisian Thoroughfare" -
Donald Byrd (Trumpet)
Bobby Jaspar (Flute on 3, Tenor Saxophone)
Walter Davis Jr. (Piano)
Doug Watkins (Bass)
Art Taylor (Drums)
Side A
Salt Peanuts 2’13
Parisian Thoroughfare 9’05
Stardust 3’19
52nd Street Theme 6’42
Side B
At This Time 10’03
Formidable 9’28
Two Bass Hit 2’56
Salt Peanuts reprise 2’15
Re-mastered from the original master tapes.
Limited edition 1000 copies.
180 gr vinyl pressed by Pallas in Germany.
Facsimile reissue using the original cover art (front photo is lost).
Double insert using an original photo by JP Leloir from 1958.
Each record has been visually checked to prevent defects. 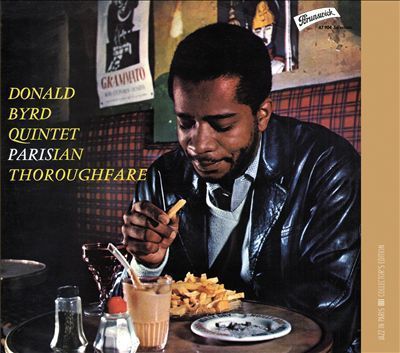