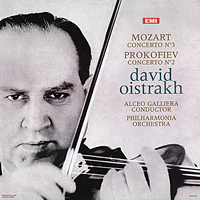 MOZART Violin Concerto No.3 in G, K.216 PROKOFIEV Violin Concerto No.2 in G minor, Op.63
David Oistrakh Philharmonia Orchestra David Oistrakh, Alceo Galliera
In Prokofiev’s Violin Concerto No. 2 Oistrakh is partnered by the Philharmonia Orchestra under Alcio Galiera. Oistrakh had been a close friend of the composer and was the dedicate of Prokofiev’s Violin Sonata No. 1. When it came to the recording of Mozart’s Violin Concerto No. 3 there was an initial crisis since the conductor booked for the session failed to arrive. After some discussion with the producer Walter Legge, Oistrakh himself offered to direct the orchestra in addition to playing the solo part. As can be heard on this record, this unforeseen arrangement worked splendidly, and there is a close rapport between the violinist and the Philharmonia.
in May 1958, David Oistrakh was staying, an outstanding violinist from Russia, for recordings in London. The second violin concerto by Prokofiev, with which Oistrakh had a close friendship (the composer had dedicated his first violin concerto), was to be recorded. His performance of the demanding, energetic, sometimes humorous concerto is of special importance. With his stupendous technique and virtuosity Oistrakh underlines the strong "personality" of the composition congenial and idiosyncratic yet out.
At the beginning of the recordings of Mozart's third violin concerto contrast there was a crisis: The conductor, who had been engaged for met, not one. After some discussion Oistrakh accepted to take over the management of the orchestra in addition to the Solopart. The unplanned arrangement bore fruit, the soloist and the orchestra harmonized perfectly. Oistrakh provides this an extremely touching and poignant variety of the concert with an exceptionally high-expression and sound quality.
Like the coexistence of these two very different works seem strange at first, so they turn out ultimately the more than extremely exciting and successful pair.
Side One
Mozart: Concerto No. 3 in G Major, K.216
Band 1 - First Movement: Allegro - Cadenza - Tempo 1
Band 2 - Second Movement: Adagio - Cadenza - Tempo 1
Band 3 - Third Movement: Rondo (Allegro)
Side Two
Prokofiev: Concerto No. 2 in G Minor, Op. 63
Band 1 - First Movement: Alleggro moderato
Band 2 - Second Movement: Andante assai
Band 3 - Third Movement: Alleggro ben moderato