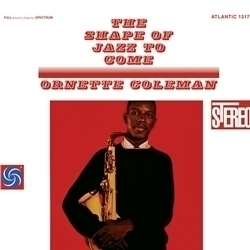 It was John Lewis, pianist of the Modern Jazz Quartet, who brought Ornette Coleman to the renowned Atlantic label, having heard him play in Los Angeles. Ornette Coleman is doing the only really new thing in jazz … he reportedly said. The present initial Atlantic album was released just in time to coincide with the New York debut of the Coleman Quartet in November 1959. Lewis was sure that Coleman would open up new paths for jazz, and his opinion is reflected in the title of the album – "The Shape Of Jazz To Come". After the rather worn-out hard bop routine of the past years, this music was like a breath of fresh air. The fast numbers ("Eventuality", "Chronology") remind one of wildly hyped-up bebop. Other numbers ("Congeniality", "Focus On Sanity") juggle with catchy, almost folk like short motifs.

This album contains two of Coleman’s most beautiful compositions: "Peace" and "Lonely Woman", which was later given lyrics and often heard in its vocal version. The Mulligan-Baker Quartet provided the model for the pianoless quartet – and when the band swings along once in a while with a moderato tempo, it is truly reminiscent of cool jazz. Be that as it may, the two wind instrumentalists just love the frenetic 'cry' and the intentionally 'imprecise' interplay. Clearly defined stanzas or traditional harmonic forms were not for them. The jazz musicologist Peter N. Wilson wrote: »A record, which is not unjustifiably so entitled« about this LP which was given 5 stars by the magazine Rolling Stone.

Any understanding of jazz's avant-garde should begin here.

Coleman caused a stir in the late 1950s when he began to play what has come to be known as free jazz Hoping to free himself of the restrictions of chord progressions and song structures, he simply played melodies and gestures. Recorded in 1959, The Shape of Jazz to Come is a rather conservative experiment with such concepts, and the average listener may not notice much is different, but Ornette and a multitude of musicians since have used the idea of "free" playing as a springboard into a vast musical realm.