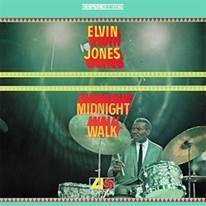 It was certainly a motley crew that came together with Elvin Jones, the legendary ex-Coltrane drummer, in the New York Atlantic Studio in March 1966. His trumpeter brother Thad was first class, but Dollar Brand on the piano, Don Moore on the bass and sax player Hank Mobley, who always came up as second choice behind John Coltrane? However that might be, the impulsive, forceful beat of the grand, versatile Elvin drove his musicians onwards to unknown heights. When he invited a musician into the studio, it was power more than anything that was demanded of his soloists.

The numbers stemmed mostly from the participating musicians, with two additions by contemporary composers in the genre. Two titles in particular will ignite your enthusiasm, for the Thad Jones pieces are so good that they really should belong among the repertoire of the Thad Jones–Mel Lewis big band, years later. Thad is often highly praised for his skill as a composer and arranger, and this is the reason that he is acknowledged and honoured to this day for his part in the history of jazz. Later known as Abdullah Ibrahim, Dollar Brand’s composition is a splendidly catchy melody; quite rightly Dollar Brand often performed this number at later performances.

It was always a pleasure to hold an Atlantic LP in one’s hands, for they had a sturdy cover and professional, informative liner notes. The few rare original recordings, which come on the market, are a luxury one can hardly afford! That’s why you should purchase this re-release without fail when you see it. Who knows when it will be available again?

This Speakers Corner LP was remastered using pure analogue components only, from the master tapes through to the cutting head. -All royalties and mechanical rights have been paid.