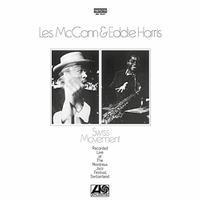 This Speakers Corner LP was Remastered using Pure Analogue Components Only, from the Master Tapes through to the Cutting Head 30 Years pure Analogue

The audio re-mastering by Speakers Corner is excellent. The overall mix has good stereo separation. The various expanded tones of the sax and trumpet are captured with vibrancy. Harris piano is clean and blends with the band seamlessly. The analog mix showcases the live intimacy of the group. The crowd noise is still prominent and mirrors the excitement on stage. The album cover and back contain the original black & white photographs .This is a great album and should be part of any jazz aficionado’s vinyl collection!    Sound 5/5 Audiophile Audition

One of my “go-to” torture tests for tracking is the Speaker Corners reissue of the Swiss Movement  I was blown away then, and I still am today. In the first two cuts, “Compared to What” and “Cold Duck Time,” McCann and Harris put on a saxophone and piano clinic, but it is the last-minute walk-on performance by trumpeter Benny Bailey that steals the show in my estimation. His solos push the performance to another level. Not only are they hard to track but there is a “rawness” to the sound that, if captured correctly, is amazing to hear. On the other hand, if the cartridge can’t handle the tracking, it can sound like fingernails on a chalkboard Audiobeatnik

Les McCann had already been playing his way through the clubs and record studios on the U.S. West Coast for 10 years when his appearance on June 21, 1969 at the relatively new and jazz-soaked festival in Montreux on Lake Geneva changed all that. There, he celebrated his greatest musical success, his No. 1 hit. Half ironically, but proudly in later concerts, when the piano stool could hardly bear him due to his size and weight, he stressed that Swiss Movement had supported him, his wife, children and grandchildren.
"Compared To What" is a catchy melody that is heard on the radio, again and again, all around the world, today, tomorrow and the day after ... It is unmistakable, still groovy, full of soul, humorous, stirring. And "Cold Duck Time" is no way inferior: Eddie (Eddie - who?) Harris blows for all he is worth. Everyone can hear that Benny Bailey was challenged by the unknown themes, but this maestro still managed to capture the audience's ear and attention.
Swiss Movement is, and will remain forever, a highlight among all the jazz LPs that have been recorded live and it shouldn't be missing from any collector's shelf. Along with Benny Goodman's Carnegie Hall Concert from 1938, Charlie Parker & Co.'s Massey Hall concert from 1953, and Ella Fitzgerald's Berlin concert from 1960 — and very few others.
This Speakers Corner LP was remastered using pure analogue components only, from the master tapes through to the cutting head. All royalties and mechanical rights have been paid.
Recording: June 1969 live at Montreux Jazz Festival
Production: Joel Dorn & Nesuhi Ertegun

Selections:
Live at Montreux Jazz Festival, June 1969
1. Compared To What
2. Cold Duck Time
3. Kathleen's Theme
4. You Got It In Your Soulness
5. The Generation Gap