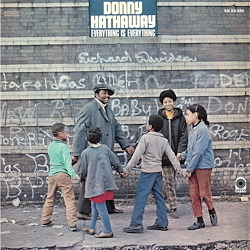 As for the sound and mastering quality, the music emerges from a beautifully arrange soundstage. The latter, infused with clarity and transparency, is spread evenly across the channels while the soundstage is pushed a bit further than you might expect left and right. This gives a panoramic view of the music which sounds grand and just a bit on the epic side of life with a slight, just a slight, 70s-era warming presentation. The space and air infused in the soundstage also allows the music to flow with ease. That same space adds detail to each voice and instrument. An example of that is the backing harmonies on the track Je Vous Are (I Love You) which features a soulful rendition with a slow funk twist that is eminently appealing. The fact that the master allows the ear in between each voice just adds to the emotion of their cries. A classic master for a classic album.-Theaudiophileman

1970 debut by soul singer Donny Hathaway. Everything Is Everything features the standard socially conscious cuts including "Tryin' Times," but the real deal, actually, is in the covers — Ray Charles' "I Believe To My Soul" and Nina Simone's "To Be Young, Gifted And Black."

Many a musical career began in the gospel church choirs of the black communities, but that of Donny Hathaway must certainly be one of the most meteoric. Rolling Stone magazine named him the 49th greatest singer (of 100) of all time, though this might sound somewhat abstract. But just the very first few bars of the opening number "Voices Inside" promises a programme in which the instrumental and human voices are on a par. Just listen to the impressively saturate sound and clear phrasing of the wind instruments which range from discreet to brassy. Spiced with peppery volleys on the clavinet, Hathaway’s soul sound breaks into new ground with harmonically fresh blues ("I Believe To My Soul"), soars passionately upwards ("Misty") and ploughs through a percussive, dry and cheerful confusion in the number entitled "Sugar Lee". Every single arrangement profits to the full from the excellence of the musicians and each number is therefore quite unique. Softly cushioned, melodious togetherness ("Trying’ Times") seems just as natural as prayer-like gospel song ("Thank You Master For My Soul"), which ventures into the realms of free jazz harmonies to the glory of God. To round off the album we once again hear Hathaway’s voice, smooth and soaring, right up into the top register, in the short number "A Dream" – an apt description of the whole album.