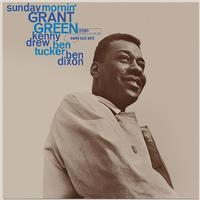 Grant Green was a Blue Note mainstay and is a jazz icon. He has played on hundreds of recordings and released over 30 albums. Sunday Mornin' was his fourth record and first with a pianist, Kenny Drew. About 3 minutes in on side one Drew makes his presence known and he keeps getting further and further out... the rhythm section of bassist Ben Tucker and drummer Ben Dixon "hold it down" throughout with transcending solos and Grant's playing is just mind blowing. Legendary recording engineer Rudy Van Gelder is like a 5th member of the session capturing the instruments, the air, the vibe of the studio, the stereo soundstage (unusual in those days) just perfectly.

Upon hearing the Sunday Mornin' analog tapes used for cutting this release, mastering engineer Kevin Gray gleefully proclaimed, "Rudy's sound doesn't get any better than this, it really doesn't!". He would know, Kevin has cut more Blue note lacquers than anybody in the world.

Grant was seemingly always ahead. He composed the lead off song, "Freedom March" in 1961... 2+ years before what most consider the start of the modern day Civil Rights Movement. Jazz musicians, certainly not Grant Green, seldom receive the credit they deserved for their profound impact on the Civil Rights movement. Another Green original, the title cut, "Sunday Mornin'" is influenced by gospels but in a more spiritual, positive, happy way. Same goes for the cover of "God Bless The Child"...aching and beautiful.

The record closes with a cover of the Miles Davis standard, "So What"... at the time barely a year old but Grant's intuition told him the tune would become a vital piece of jazz history.

Originally recorded in 1961 and released in 1962, Slow Down Sounds is proud to present this Authentic Analog Audiophile reissue pressing.

Side A:
Freedom March
Sunday Mornin'
Exodus
Side B:
God Bless the Child
Come Sunrise
So What