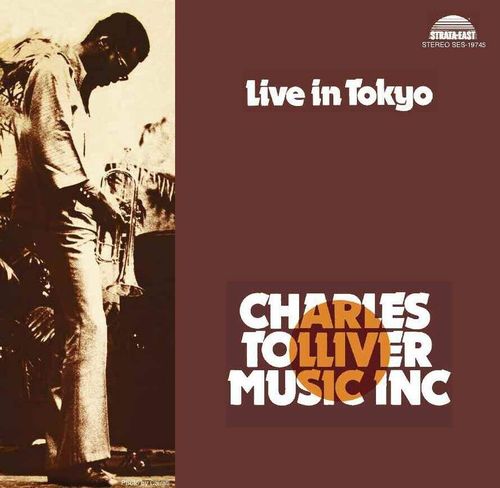 Live In Tokyo is exceptionally powerful acoustic hard bop, easily the equal of the electric and fusion experiments of the time -and proof positive that Tolliver, who astutely (and acutely) combined the best of both traditional swing and jazz throughout the 1970, remains one of the music's great-and most underrated".- Jazzwise

It’s incredible to witness this resurgence of Strata-East’s recordings over the last few years – an appreciation for the label’s ground-breaking approach to music-making, backed by a phenomenal catalogue, continues to attract listeners both new as well as its devoted faithful once again giving rise to its revered and cult-like status. The label’s return to prominence and its subsequent reintroduction to new audiences has been aided, in no small part, by reissues like these – Pure Pleasure as a prime example of a label that lovingly curates these treasured releases, repackaging them for vinyl enthusiasts the world over.

There’s certainly a keen eye that goes into the joyous task of plunging through the Strata-East vaults and although Charles Tolliver and Music Inc’s ‘Live in Tokyo 1973’ isn’t as forgotten a treasure as previous Pure Pleasure reissues of projects like Stanley Cowell’s ‘Such Great Friends’ may be, it’s no less of an incredible project to revisit in this way.

Recorded 7th December 1973, the fifth album by trumpeter Charles Tolliver and his quartet of musicians comprising Music Inc performed a 50-minute set in Tokyo’s Yubinchokin Hall. The performance was initially released through Strata-East the following year and would even be revisited a further time by Mosaic Records in 2005 as part of a three-disc box set – all of this a true testament to the masters of the craft gracing the stage on this night.

Despite the slew of releases with Music Inc, Tolliver boasts an incredible resume that has seen him perform alongside luminaries including Horace Silver, Andrew Hill, Roy Ayers, Gary Bartz amongst others. Born in Jacksonville, Florida, and raised in New York from the age of 10 years old, Tolliver’s inspired contributions to jazz couldn’t be celebrated enough – from his innumerable successes as a musician in his own right to his achievements as co-founder of Strata along with Stanley Cowell. Despite neither having any formal or business training, Tolliver and Cowell’s pioneering efforts positioned them as beacons for being an independent, black-owned success story.

With the Music Inc quartet comprised of bassist Clint Houston, drummer Clifford Barbaro and Stanley Cowell on piano, Tolliver and company present a set of five compositions including tracks from the pen of the trumpeter himself (‘Drought’ and ‘Stretch’) as well as a heralded rendition of ‘Round Midnight’ initially composed by Thelonious Monk. Kicking the project off with the exquisite slow build of ‘Drought’ which starts with Tolliver’s trumpet holding court on centre stage while the glorious crescendo builds around him. ‘Stretch’ eschews in another high-energy number before making way to the sublime lament of ‘Truth’.

‘Live in Tokyo 1973’ is certainly a project that has been afforded its due reverence over the years but once again, an exceptional performance from Charles Tolliver and Music Inc benefits from an unrivalled presentation at the hands of Pure Pleasure.

Audiophile Vinyl - Made in Germany  For over 60 years the family business in the third generation of the special personal service and quality "Made by Pallas" is known worldwide. Our custom PVC formulation produces consistently high pressing quality with the lowest surface noise in the industry. Our PVC complies with 2015 European environmental standards and does not contain toxic materials such as Lead, Cadmium or Toluene. Our vinyl is both audiophile and eco-grade!
Browse this category: JAZZ
Contact information
Charles Tolliver Music Inc - Live in Tokyo 1973 - 180g LP - SCOTT NANGLE AUDIO
T&C's and Privacy Policy